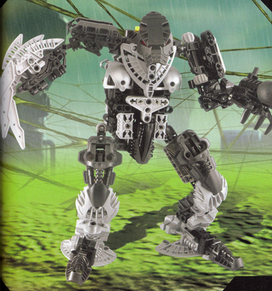 Savage was an insane Toa Hordika who was recruited into the Dark Hunters.1, 2 He possessed a highly developed tracking sense and a Rhotuka spinner that could paralyze his enemies. His tri-claw had the power to liquefy solid matter.2

Savage, as he was code-named, was a Toa transformed by Visorak venom into a beast-like Toa Hordika. He lost the ability to speak and could only growl and bellow. He was a skilled hunter, able to track a mote of dust across a desert. His Rhotuka spinner could paralyze his enemies, and his tri-claw had the power to liquefy solid matter. As a Dark Hunter, Savage was occasionally overcome by madness and had to be restrained so as not to harm himself or other Dark Hunters. In this case, he was kept in a specially prepared cell in the Shadowed One's fortress, to be released when he calmed down. The Shadowed One docked Savage's pay for the extensive damage he did to the cell walls and door.3

As of story year 2006, Savage was temporarily inactive and being kept in confinement.3

Keetongu would not have been able to cure Savage.4

Keetongu had the ability to save Savage.5