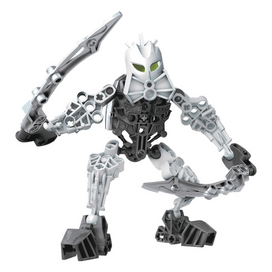 Solek was an expert on the ancient legends of the Toa Mata and particularly on those of Kopaka. He was overjoyed to see the Toa Nuva arrive and was bursting with questions for them. He teamed with Kopaka Nuva to battle the Makuta in Karda Nui. When in physical contact, Kopaka could share Solek's memories. Solek gained the power to create objects out of solid light. Solek carried two power swords and wore a rocket booster on his back which allowed him to fly. As of the end of story year 2008, he was living on Metru Nui.1

With Kopaka Nuva, Solek had the power to create objects of solid light.2