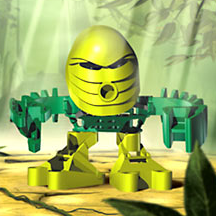 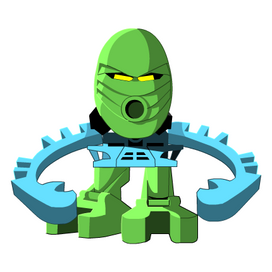 Tamaru was a friendly, fast-talking Le-Matoran. On Metru Nui, Tamaru once dreamed of being an airship pilot. Unfortunately, he washed out of training due to a fear of heights. He later opened his own shop, Tamaru's Transports, renting and selling used vehicles and failed test-track prototypes.1

On Metru Nui, Tamaru was a fast-talking Matoran who rented and sold used Ussal carts, failed test track vehicles, and other modes of transportation from his shop, called Tamaru's Transports. After washing out as an airship pilot because of his fear of heights, Tamaru decided it made more sense to have a career firmly on the ground. For Matoran who wanted a change from riding in chutes, his shop was the place to go.2

On Mata Nui, Tamaru similarly failed to become a Gukko rider and ended up working as the keeper of the Le-Koro throwing disk range.1