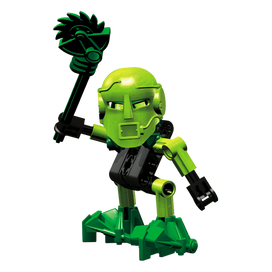 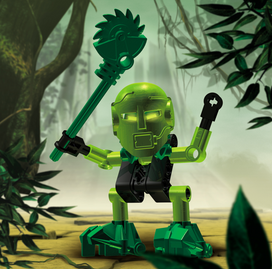 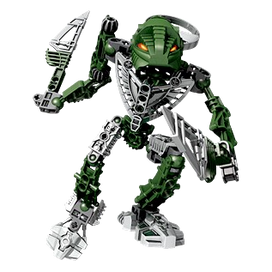 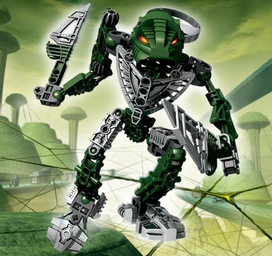 Matau was a Le-Matoran Ussal cart driver and Test Track driver from Metru Nui who became the Toa Metru of Air, serving as part the Toa team that rescued the Matoran from Metru Nui after the Great Cataclysm, and later became the Turaga of Le-Koro.

Turaga Matau, one of the wisest of the Turaga, ruled the treetop village of Le-Koro.1

Turaga Matau's color was green, his village was Le-Koro, and his mask was the Kanohi Mahiki, the Noble Mask of Illusion. His tool was the Kau Kau staff. He was always calm in a crisis. He was famous all over the island of Mata Nui for his sense of humor.2

Toa Matau was the Toa Metru of Air. Matau looked forward to becoming famous as a "Toa-hero." To others, he may not have seemed to take his duty, or much of anything else, seriously, but he possessed great courage. He wore the Kanohi Mahiki, the Great Mask of Illusion.4

As a Matoran on Metru Nui, Matau rode chutes all his life, as did most Matoran. Living in Le-Metru, he even had the chance to repair a few chutes in his time. Matau was quite proud of the fact that no one outside of his metru knew more about chutes than he did. Matau was not known for deep thought.5

It was known that Orkahm disliked Matau, who was a prankster. Matau and Orkham had known each other for a long time. Orkahm was thorough, cautious, and meticulous, which made him a slow rider. Matau, on the other hand, had always been fast and reckless, which was why the two never got along. Matau considered Orkahm to have little imagination.5

Many Matoran, including Matau, found it fun to leave behind marks on chute support struts.5

According to Orkahm, Matau was a danger to everyone on the road as a [Ussal crab?] rider.5

As a new Toa, Matau hated swimming and had no experience in it.6

As a Toa Metru, Matau's element was air, and his tools were twin aero slicers, which could act as glider wings. His mask was the Kanohi Mahiki, the Great Mask of Illusion.7

Of all the Toa Metru, Matau was the happiest about their transformation from Matoran into Toa. Even when he was just an Ussal cart driver, he dreamed of being a famous hero. Once that happened, he intended to enjoy every minute of it. Deep inside, he worried that he might not have been able to live up to his own image of what a Toa should be. As a result, he sometimes showed off or took needless chances to prove to others that he was truly a "Toa-hero." He particularly wanted to impress Nokama, although as of mid-story year 2004, she had showed no sign of interest in the impulsive Toa Metru of Air.7

As a Matoran, Matau's favorite part of his job was to test new vehicles before they hit the streets of Le-Metru. He thought of himself as the most highly skilled rider in the entire metru. As a Le-Metru native, he was one of the best at chute-jumping.9

As a Matoran, Matau spent long days riding Ussal crabs through Le-Metru, dreaming of having adventures like a Toa.9

Matau knew Vahki transports well and was able to drive them.9

Matau was the Toa Metru of Air and Turaga of Le-Koro.10

As a Matoran, one of Matau's favorite things to do was to test a new vehicle on the Le-Metru test track.11 He spent much of his spare time at the Moto-Hub as a Matoran.12 He visited the Test Track frequently, often volunteering to test the latest creations.13

As a Toa, Matau was the master of air. He could summon a windstorm or cyclone, raise the air pressure in a chamber until the walls burst, and absorb all the air in a room into his body before releasing it in a massive blast. He was also a skilled flyer with the aid of his Toa tools. He carried twin aero slicers that doubled as wings.11 As a Toa Hordika, he carried twin fang blades.11 As a Toa, Matau wore a Great Kanohi Mahiki.11, 14 As a Turaga, he wore a Noble Kanohi Mahiki and carried the Kau Kau staff.14, 11

Matau loved being a Toa Metru. To him, it was all excitement and fun and the chance to be remembered forever for his heroic deeds. Even in the darkest moments, he never fully lost his sense of humor or his taste for adventure. Only when he was transformed into a Toa Hordika did he succumb to bitterness. Even then, he remained fiercely loyal to Nokama and the other Toa. Only his relationship with Vakama suffered during this period. As a Turaga, Matau could be calm and wise one moment, and pull a practical joke the next. His motto was "talk ever-quick, and move ever-quicker." Although he could be a prankster, he was also seen as a brave leader who would never ask a Matoran to do something he would not do himself. As a result, the Le-Matoran were fiercely loyal to him.11

Turaga Matau's tool and badge of office was the Kau Kau Staff.15

Matau was a Matoran of Air in Metru Nui whose job was to test prototypes of new vehicles. As someone who was reckless and a lover of speed, Matau frequently crashed. As a Toa Metru, Matau wore the Kanohi Mahiki, the Great Mask of Illusion, and carried twin aero slicers which also functioned as wings. He was later the Turaga of Le-Koro on the island of Mata Nui. He became known for his sense of humor as well as his bravery, particularly enjoying playing pranks on Turaga Nuju.16

Matau was an Ussal rider as a Matoran.17 Orkahm was not Matau's superior; they were colleagues.18