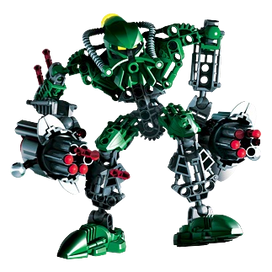 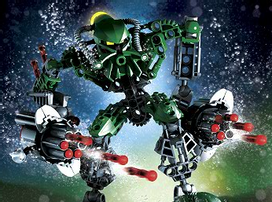 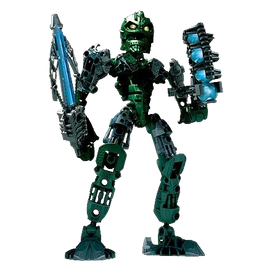 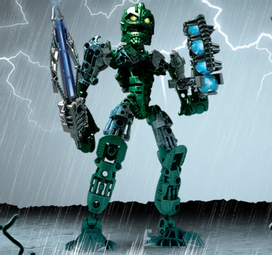 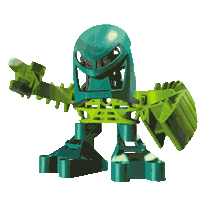 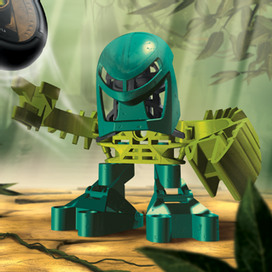 Kongu was a Le-Matoran1 hero and later the Toa Inika and Toa Mahri of Air2, 3, part of the Toa team which recovered the Kanohi Ignika to save the life of Mata Nui.

Kongu's color was green. He was captain of the Le-Koro Gukko Bird Force, which defended Le-Koro from danger. He was an expert bird wrangler, pilot, and navigator.4

On Metru Nui, Kongu was responsible for the main chute controls.5

On Metru Nui, Kongu worked in the Le-Metru control room that governed the chutes. In ages of work, he never ran into anything more dangerous than the occasional force sphere or chute breakdown, until he was visited by Nidhiki and Krekka.6

On Metru Nui, Kongu was simply another worker, a chute controller assigned to oversee the chute controls in the Moto-Hub.2, 7 The only excitement in his life came when the Nidhiki and Krekka captured him and forced him to reverse the flow in the chutes in an effort to capture the Toa Metru.2

On Mata Nui, Kongu developed an incredible skill at dealing with Rahi. He became the best bird wrangler in all of Le-Koro2 and captain of the Gukko Bird Force.8, 2

As a Toa, like Lewa Nuva, he controlled the element of air.2

Kongu had to make a lot of adjustments in his personality as a Toa. He spent a great deal of time as the commander of a defensive force on Mata Nui, yet the Toa already had a strong leader in Jaller. Emulating his heroes Lewa and Matau, he took on the role of cynic and humorist to help break the tension. He was still adjusting to it during the Mahri Nui mission, but fulfilled it well.2

As a Toa Inika, Kongu wore the Kanohi Suletu9 and carried a Zamor sphere launcher and an energy crossbow. As a Toa Mahri, he carried two Cordak blasters and wore the Kanohi Zatth10.2

Becoming a Toa posed some unique challenges for Kongu. First, he was unhappy that Nuparu got the Mask of Flight instead of he, since Kongu was, after all, the master of Air. Then he discovered that the mask he did have, the Mask of Telepathy, gave him telepathic powers which could not be turned off. He spent the entire adventure on Voya Nui having to hear the thoughts of everyone around him. As the Toa Inika of Air, Kongu wore the Kanohi Suletu, the Mask of Telepathy, and carried a zamor sphere launcher and a laser crossbow.11

Toa Kongu's element was air. His mask was the Kanohi Suletu, the Mask of Telepathy. His weapons were a zamor sphere launcher and laser crossbow. Kongu was quick, impulsive, and sharp-tongued. Kongu was dealing with a very serious problem – he had not figured out how to turn his mask power off.12

Toa Mahri Kongu's equipment was two Cordak blasters. His mask was the Kanohi Zatth, the Mask of Summoning. The Toa of Air may have hated being underwater, but that did not stop him from making the Barraki sorry they picked a fight. His Mask of Summoning allowed him to call sea creatures to his aid, from the smallest insects to massive, prehistoric beasts of the ocean. Kongu hated the water and everything in it.13

Despite some early tension, even Kongu came to respect Nuparu.14

The battle in the Pit was not an easy one for Kongu. His new mask power frightened him, since he never knew what creature he might summon with it. As a Toa Mahri, Kongu wore the Kanohi Zatth, the Mask of Summoning, which could bring forth sea creatures to aid him. He carried two Cordak blasters.15

Kongu could move through the trees at astonishing speed and was among the most clever of the villagers.16

The nature of Kongu's Suletu had a lot to do with where it was found, having been buried for so long.17

As a Toa Inika, Kongu's weapon was an energy crossbow.18