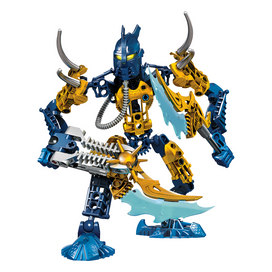 Tarix was the Prime Glatorian of Tajun. He was an experienced fighter and one of the creators of the Glatorian system. As of story year 2009, he was the current overall champion among Glatorian.2

A veteran Glatorian, Tarix had won more than a thousand matches with his twin water blades and spiky Thornax launcher. Tough but fair, he was respected by all his opponents for his incredible skill.3

Tarix once beat Malum in a match using a back-flip maneuver to dodge a Thornax.4

Tarix was listed on the Wall of Champions.5

Tarix was a famous veteran Glatorian.6

Tarix was the Prime Glatorian of the water village of Tajun and had a long and legendary history on Bara Magna. He was credited as one of the founders of the Glatorian system. As of story year 2009, he was still among the top fighters ever and currently held the title of champion. Tarix won a record 93 tournaments in a row. Tarix had trained Kiina and worked with Gresh, and he always made time to work with newer Glatorian. Unlike some veteran warriors, he did not see newer fighters as rivals, but rather as the future of the Glatorian system. Tarix wielded twin water blades and carried a spiked Thornax launcher.7

Ackar was close to Tarix.8

Tarix used his tube to breathe underwater.9 His gold-colored weapons were most likely found in ruins near Tajun.10

Certavus and Tarix got along.11