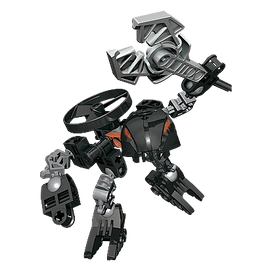 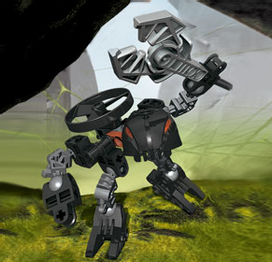 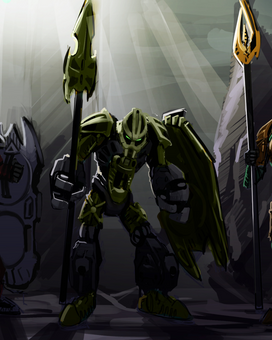 Bomonga was a Toa1 of Earth who was later mutated into a Rahaga.

Nicknamed "Quiet-Night," Bomonga hunted in absolute silence. His prey were Rahi "hiders," insect and nocturnal species. From a place of concealment, he launched silent spinners that attached to and temporarily paralyzed Rahi.2

Bomonga greatly helped Iruini capture cable crawlers with his ability to stay completely still for hours and lure them close, since total surprise was the only way to snare them.3

As a Rahaga, Bomonga specialized in capturing Rahi hiders, such as fireflyers and blade burrowers. He could launch Rhotuka spinners which flew in absolute silence and then adhere to and paralyze a target. He was known for his patience and willingness to remain motionless for long periods of time while waiting for a target to pass by.4

At least in the alternate universe of the Toa Empire, Toa Bomonga had black armor and carried a shield and a seismic spear. Kualus considered him to be surly and grim.5

As a Toa, Bomonga wore a Mask of Growth.6

The deputy leader of the Toa Hagah was most likely Bomonga.7