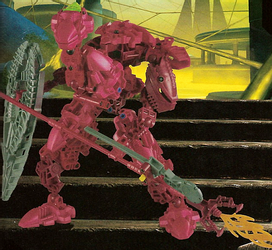 Firedracax was a Matoran transformed by energized protodermis into an armored warrior with a hatred for Visorak. He joined the Dark Hunters2 for the chance to kill Visorak. His shield was unbreakable and his Rhotuka spinner absorbed thermal energy from the air and redirected it at a target in a burst of heat and flame.3

Firedracax, as he was code-named, was once an ordinary Matoran living on an idyllic island well to the south of Metru Nui. His peaceful life was shattered when the Visorak invaded. Panicked, he and some of his friends fled, only to fall into a pool of energized protodermis. All of them perished except for Firedracax, who emerged transformed into an armored titan with a bitter hatred for Visorak. Firedracax was one of the Dark Hunters' more recent recruits, who were very willing to take him in, being at war with the Brotherhood of Makuta. Although the Visorak were scattered and leaderless during the war, he was quick to hunt them down. The Shadowed One allowed him to do so, reasoning that it was best not to afford Makuta the possibility of reclaiming the Visorak legions.4

Firedracax was equipped with an unbreakable shield. His Rhotuka spinner absorbed all thermal energy from the air and directed it at a foe in a devastating blast of heat and flame.4

Firedracax was a real name, not his Dark Hunter codename.7, 8