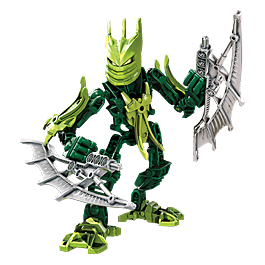 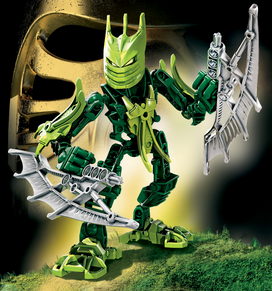 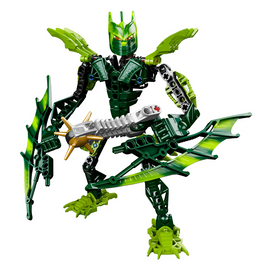 Gresh was the youngest Second Glatorian in the history of Bara Magna and was unusually talented for a fighter of his age. He worked at honing his skills so that he could become almost as good as Prime Glatorian Vastus. While some Glatorian would pass right by an Agori in trouble if he could not pay, Gresh believed that anyone with strength and skill had an obligation to defend those who were weaker. Although young and exuberant, Gresh believed that he needed to appear very dedicated and serious all the time. Kiina tried to get him to enjoy life a little more and show his feelings, with some success. She believed that Gresh felt a little intimidated around famous veteran Glatorian like Tarix and Ackar. Gresh was known for having a unique approach to preparing for matches. While most Glatorian would practice in the arena before a fight, Gresh preferred to go off on his own. His explanation for this was that veteran Glatorian knew lots of moves and could change their strategy in a split second. Being newer to the profession, Gresh felt he needed every advantage he could get, and keeping his tactics secret until the last possible moment gave him an edge. Another way in which Gresh was different from other Glatorian was that he was actually welcome to train in other villages besides his own. Normally, this was, at best, frowned upon, and in some places even forbidden. However, because Gresh had so often aided Agori from Tajun and elsewhere, the village elders were willing to make an exception for him. He could often be found in Tajun, training with Kiina. Gresh's attitude toward other villages had sometimes put him at odds with other Glatorian. He and Strakk did not get along at all, although they worked together more than once. He had also argued with Vastus, who felt strongly that Glatorian should defend their own villages and not worry about others. Given more time and experience, some believed that Gresh could one day rival Ackar, Tarix, perhaps even Certavus himself in the ranks of great Glatorian. It remained to be seen whether the Skrall invasion would allow anyone the luxury of time to train and learn. Gresh carried a Thornax launcher and a shield, which he could split in half to form two bladed weapons.5

A newcomer to the arena, Gresh had beaten every opponent he had faced, except the Skrall. Skilled with any weapon, he preferred to fight with his shield and spiky Thornax launcher.7

Gresh observed that veteran Glatorian like Strakk or Tarix had one set of moves they let other Glatorian see in practice, and another they used in the arena. Since he was not a veteran, Gresh practiced alone before his matches to keep his moves a secret.8

In story year 2010, now wielding the elemental power of air, Gresh had to use all of his Glatorian skills to help defeat invaders from another universe.9

Kiina was a close friend of Gresh.3

Gresh was of the Jungle Tribe and was located in Tesara. His equipment was a shield and Thornax launcher. Gresh was the youngest Second Glatorian in the history of Bara Magna. He was unusually talented for a fighter of his age.3

Unlike many Glatorian, Gresh felt a responsibility to use his abilities to protect those who are not as strong as he. This sometimes annoyed other Glatorian, as he would do jobs for free that they might otherwise have been paid for. Although he acts very serious sometimes, he also has a fun side he sometimes lets slip out.3

Gresh was the only Prime or Second Glatorian who did not fight in the Core War.3

Gresh was very good at handling Strakk, once getting him to help a village out by tricking him into thinking a fortune in precious metal was buried beneath the place.3

Gresh was the only Glatorian "brave" enough to ever try eating Thornax stew.3

Gresh was the Second Glatorian of Tesara. Although the Prime Glatorian, Vastus, was the better fighter, Gresh did many of the matches that took place outside of Tesara, since Vastus preferred to remain close to home in case it came under attack.10

Tarix had worked with Gresh.11

Although they were as different as two Glatorian could be, Gresh seemed to understand best how to handle Strakk. If he wanted to get Strakk to go somewhere or do something, he told him about the riches available in return (even if they did not really exist). If he needed Strakk to keep going when the ice Glatorian wanted to turn back, he made it clear that there was a spiked Thornax waiting to be fired at him if he tried to leave (an argument which Strakk usually found very persuasive).12

Gresh was protective of his village and its people, reluctant to leave the place undefended and often sending Gresh to fight in matches in other villages.13

Gresh was too young to have participated in the Core War.14