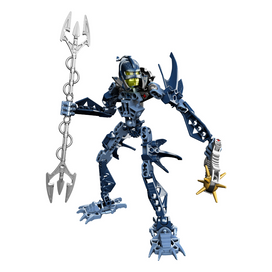 Kiina was the Second Glatorian of Tajun and the top female Glatorian on Bara Magna. She was hot-tempered and impetuous, but also loyal to her friends and relentless against her enemies. She was a close friend of Ackar and Gresh and was known for her intense dislike of Bara Magna. Her greatest wish was to leave the planet and live on another inhabited world.

The top female Glatorian on Bara Magna, Kiina was fearless and an expert with a spiked Thornax launcher or her dual-headed vapor trident. Any Glatorian would rather have her as an ally than an enemy.3

Ackar said that he did not always agree with Kiina's methods, but he respected her ability and had trusted her with his life on multiple occasions.4

Kiina was of the Water Tribe and was located in Tajun. Her equipment was a dual-headed vapor trident and a Thornax launcher.2

Kiina was the Second Glatorian of the village of Tajun and the best-known and most successful female Glatorian on Bara Magna. A close friend of both Ackar and Gresh, Kiina teamed with them more than once.2

Kiina had an intense dislike of Bara Magna. She was convinced that there must have been life on other worlds, and that someday she would get away from that barren rock. When Mata Nui showed up in Vulcanus and told Ackar that he came from another universe, Kiina was sure this was her opportunity.2

In terms of personality, Kiina was fiercely loyal to her friends and a menace to her enemies. She could be quick to judge and harsh in her criticism of others. Mata Nui was convinced that she must have been through some very hard times in her life which had led her to build a hard shell around herself.2

Kiina had a special dislike for the Great Beings, whom she blamed for the Core War and the destruction of Spherus Magna.2

Kiina was the Second Glatorian of the village of Tajun and one of the best-known and most successful female Glatorian on Bara Magna. Hot-tempered and impetuous, Kiina could sometimes be a trial to be around. However, as Ackar once put it, "I don't always agree with her methods... but I would trust her with my life." She was fiercely loyal to her friends and relentless against her enemies. The most striking thing about Kiina was her intense dislike of Bara Magna. She was not native to the region, originally living north, near the Dormus River. Although she could have returned to the river after the Shattering, the presence of water tribe Agori convinced her to stay and defend them against threats. Her fondest wish, since then, was to get off the planet. She was convinced that Spherus Magna was not the only inhabited world in the galaxy and that someday she would find a way to reach another one. Other Glatorian had laughed at her about this and even made wagers with her about the notion of other populated worlds existing. Kiina wielded a Thornax launcher and a dual-headed vapor trident.1

Kiina was the Second Glatorian of Tajun.5

Gresh could often be found in Tajun, training with Kiina.6

While he was close to Tarix and Vastus, Ackar's best friend among the Glatorian was Kiina. She reminded him of himself when he was younger – brash, bold, and always ready for a fight. He did his best to keep her impulsive nature and her hot temper in check, but in battle, there was no one else he wanted fighting beside him. Although he knew her dream was to leave Bara Magna, he hoped that day would never come.8

Kiina respected Ackar; Mata Nui observed that both Ackar's word and his approval were things that Kiina valued.9

Kiina was older than Gresh.11