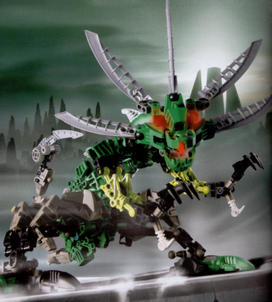 The Tahtorak was a large, intelligent, reptilian Rahi. It stood over 40 feet tall and was the largest land Rahi ever seen in Metru Nui. It was more than powerful enough to destroy a city, able to bring down entire buildings with a single sweep of its tail. The Tahtorak was once a herd animal in another land.2

For the Tahtorak specimen found in Metru Nui, see Tahtorak (Being).

The Tahtorak was able to speak Matoran.3

It's unlikely that the Tahtorak could have held a conversation with another being.4

Although slow on foot, the creature made up for it with its unimaginable strength. It was believed that Tahtorak were pack animals, but so far only one specimen had appeared in Metru Nui.5

The Tahtorak was the largest land Rahi ever seen in Metru Nui. It stood 40 feet high and had enough power to wreck the city. It was apparently an intelligent creature, capable of speaking Matoran and engaging in limited conversation. It was unknown how it learned the language. What few Archives records existed on the Tahtorak indicated that it may have actually been a herd creature in some other land. The Tahtorak relied on brute strength. Its thick hide protected it from most blows, although it did prove vulnerable to the Zivon's stinger. One sweep of its tail was enough to level an entire Metru block. The city shook with each step it took.6

Keetongu was native to the same island as the dreaded Tahtorak, and in fact those monstrous Rahi served as mounts for those of Keetongu's species.7

Ages ago, these massive creatures lived in herds that spanned hundreds of kio. Over time, the land bridges they crossed disintegrated, stranding them wherever they happened to be. A large number ended up on Zakaz, serving as mounts for the Skakdi.8

Tahtorak were reptilian creatures which averaged forty feet in height. They were capable of destroying entire cities. They were surprisingly intelligent. For a time, it was a mystery why the Tahtorak would tolerate serving the Skakdi rather than crushing them. According to a dying Tahtorak talking to a member of the Order of Mata Nui, the Tahtorak planned on wiping out the Skakdi eventually, but were willing to wait for the moment when it would be most satisfying.8

Nektann once threatened to throw Axonn and Brutaka into the Tahtorak pens.9

The Devastator was a Xian weapon designed for a Skakdi mounted on a Tahtorak to be able to kill an opponent's Tahtorak mount.10

Brutaka was stronger than a Tahtorak.11

Tahtorak did not need to eat often and can survive without food for at least one thousand years.12

Tahtorak was a species name, not an individual name.13