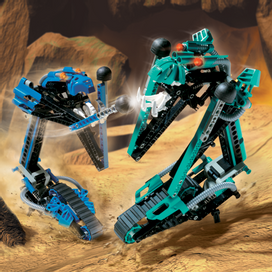 Tarakava were lizard-like amphibians which lived in shallow waters around both Ga-Metru and Ga-Koro. Their common hunting method was to lurk beneath the water until a target came by and the strike with their powerful forearms. Tarakava tended to avoid deep water, since it was home to Takea sharks and other natural enemies.1

A Tarakava could match Gali's speed, but not her agility.2

Tarakava were the hunters of the sea. These huge creatures used their mighty arms to conquer prey.2

On Mata Nui, Tarakava were lizard-like creatures that lived in coastal waters. They preferred to ambush opponents and use their incredibly strong forelegs to strike. Their region was Ga-Wahi.3

Gali remarked that Tarakava were strong, but not very clever.4

Lone Tarakava could be found lurking close to the shore of Gali's Bay.5

The Tarakava was a marine Rahi whose powerful arms could deliver a stunning blow to even a Takea shark.5

The Dweller in the Deep, which was long thought to be a myth, was believed to be the only natural enemy of the dreaded Tarakava serpents [sic].6

Tarakava were lizard-like amphibians which haunted the shallow water around Ga-Metru, although they were spotted in other places along the Metru Nui coastline as well. They were a long-time menace to Matoran navigation. Tarakava usually hunted in pairs. Their preferred method was to lurk just below the water until prey came by, then stun the victim with blows from their forelegs. Tarakava could stay underwater for prolonged periods of time and were powerful enough to capsize large watercraft. They were known to attack Matoran, but their preferred prey was larger Rahi who came to the water to drink or any of various species of seabird. A smart pilot whose boat was menaced by Tarakava would head for deep water, as the ocean was full of Takea sharks and other predators who fed on Tarakava, and the Tarakava would not pursue unless enraged or starving.7

After the Great Cataclysm, Tarakava around Metru Nui became even more dangerous, as their undersea nests had been disturbed.7

Rahaga Gaaki warned that Tarakava were always present, even if one did not see them. As long as one was prepared for them to spring out, one robbed them of their best tool: surprise. She claimed that a Tarakava was most vulnerable when it had surfaced, lunged, and missed, which was the best time to hit it with a Rhotuka spinner.7

Schools of Ruki were known to be able to drive off Tarakava.8

Takea were a fierce enemy of the Tarakava.9

Tarakava were among the beasts which Makuta used against the Toa and Matoran on Mata Nui. Although they caused a great deal of destruction, Ga-Matoran on Mata Nui showed a willingness to care for those Tarakava who had been freed from Makuta's dark influence.1