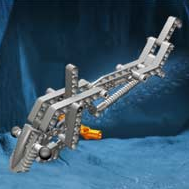 Takea were an ocean predator. Takea in Matoran meant "king of sharks."1 They were aquatic Rahi which lived in Ga-Wahi.2 They considered virtually everything in the water as an enemy, from Tarakava to Matoran fishing boats. Takea made up Pridak's army in the Pit.1

Waikiru used their tusks to drive away Takea and other aquatic predators.3

Another world existed far beneath the waters of Mata Nui. Here schools of fish congregated around protodermis reefs, feeding on the microscopic organisms that dwelled within. Then, without warning, the school would compress itself into a tight cluster, in a desperate attempt to defend against a Takea shark on the hunt. A couple of passes and the cluster was shattered, fish darting every which way in a race for safety.4

The powerful forearms of the Tarakava could deliver a blow strong enough to stun a Takea.4

Takea living in the deeper waters around Metru Nui preyed on Tarakava, which lived in the shallow waters off the coast, mainly around Ga-Metru.6

The Takea was known as the "king of sharks." They were a fierce enemy of the Tarakava. On Metru Nui, they were a constant menace to Matoran vessels, which they attacked seemingly for sport.7

Tarakava tended to avoid deep water, since it was home to Takea sharks and other natural enemies.8

Waikiru were primarily preyed upon by Takea and relied on their tusks to drive them away.9, 10

The Pillars of Salt were a preferred hunting ground of Takea living near Mahri Nui.11

Takea sharks were probably the size of great white sharks.12

The Takea sharks commanded by Pridak were likely mutated.14