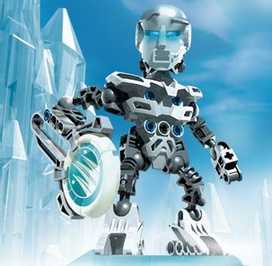 Ehrye could always be found in Ko-Metru, running errands for the scholars in the great crystal Knowledge Towers. He hoped to be a scholar himself someday. Ehrye was a messenger.3

It was often impossible not to find Ehrye, even when one wanted to avoid him. He was constantly underfoot, running errands for different scholars and pleading for a chance to become one of them. Nuju, naturally, said no. Working in a Knowledge Tower required wisdom, patience, and experience. All Ehrye had to offer were enthusiasm and too much energy for his own good. So, Ehrye went back to running errands and dreaming of life inside the towers.4

Ehrye worked as a runner in Ko-Metru. He was friends with Ahkmou; the two sometimes played kolhii [sic] together.4

Ehrye's home contained a mini-model of the huge Knowledge Tower basins that could be found around Ko-Metru.5

Ehrye had one great ambition: to be a scholar in a Knowledge Tower. However, Nuju believed he was too reckless for the job, so Ehrye had to stick to running errands around Ko-Metru. When Ehrye discovered the location of a Great Disk, he thought he had found his ticket to success. Instead, he was almost trapped forever by a pair of Dark Hunters. Ehrye later told Nuju where to find the Great Disk. As of mid-story year 2004, he was missing.6