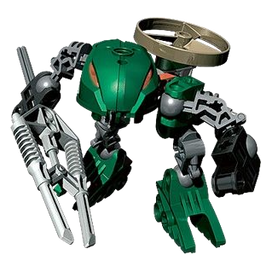 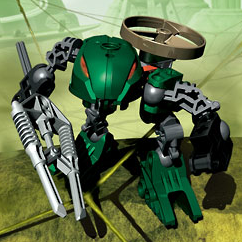 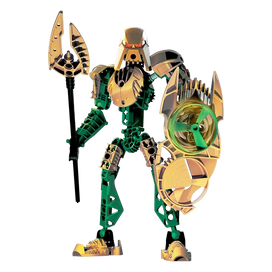 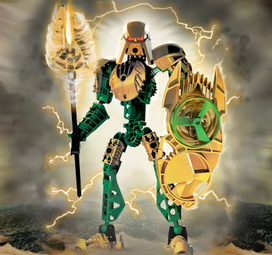 Iruini was a Toa Hagah1 of Air mutated by Roodaka into a Rahaga. As a Toa, Iruini carried a cyclone spear and a mechanical2 Rhotuka launcher whose spinner had the ability to heal.3 He wore the Kanohi Kualsi, the Great Mask of Quick Travel.3, 4 As a Rahaga, he specialized in capturing Rahi climbers such as Brakas and cable crawlers. He carried a Rhotuka spinner with the snag power, which attached to its target and tangled up its limbs like a net. He also carried a staff whose movements could hypnotize Rahi.3

Iruini relied on his patience and gentle manner to lure Rahi into his traps. His skill was so great that he could track a Rahi climber by the movements in the air. The snag spinners he launched tangled the creatures' limbs in a net and brought them down.5

As a Rahaga, Iruini specialized in capturing climbing Rahi such as cable crawlers.6

When Iruini was transformed back into a Toa, he was thrilled to be a Toa again and eager to use his powers. Iruini hated living in the Archives as a Rahaga.8

Iruini's Hagah mask was shaped to honor a fellow Kualsi wearer. It was the same shape as a standard Kualsi.9

Iruini's mask was shaped to honor a past Toa. This Toa was not Nidhiki, as he was a traitor and was not to be honored.10

Iruini's mask was not in the shape of the Mask of Stealth as it'd make no sense for him to wear a mask in tribute to a Toa who betrayed his friends.11