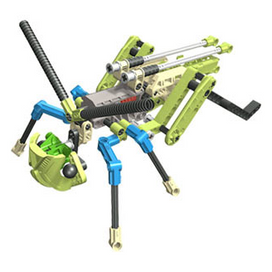 Kirikori Nui were large, locust-like Rahi. Before the Great Cataclysm, they appeared in Metru Nui every ten years or so, when they would descend on Po-Metru and Ga-Metru, consume all vegetation in sight, and then disappear. They later appeared in small numbers on Mata Nui, where they browsed at the edge of the Po-Wahi desert. They were afraid of the wasp-like Nui-Kopen.

Kirikori Nui were locust-like insect Rahi known for their appearance in the skies over Metru Nui every ten years or so. They would alight in Po-Metru and Ga-Metru, consume all the vegetation in sight, and then disappear. Their point of origin was unknown.1, 2 Much to the Turaga's dismay, they later appeared on Mata Nui. Kirikori Nui were afraid of Nui-Kopen, a fact which Matoro was credited for discovering. Fake Rahi wasps were later constructed to try to scare the Kirikori Nui away.2

It was said that in an age long past, the wings of the Kirikori Nui darkened the skies of Mata Nui and their ringing call drowned out all other sounds. As of story year 2002, the great insects were rare and spent their lives browsing at the edge of the Po-Wahi desert. Despite their scythe-like jaws and powerful legs, Kirikori Nui avoided confrontation, bounding incredible distances away from even the slightest of disturbances. The Turaga remembered the legends, however, and kept a watchful eye on the skies.3