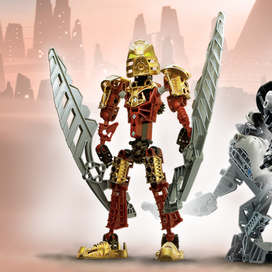 Lhikan was a Toa of Fire2, protector of Metru Nui, and later a Turaga3. Little was known of his past history.4

Toa Lhikan was the hero and protector of Metru Nui.5

Nuju's memory of Toa Lhikan was of a larger-than-life figure, defending the city against any threat and then returning, exhausted, to wait for the next call to action. He never seemed to have time for fun or friendship.6

Toa Lhikan's element was fire, and his tools were two fire greatswords, which could be merged together to form a fire board. Lhikan could ride it like a surfboard, and it was capable of flight. He could often be seen soaring high above the city.7

As of story year 2004, little was known about Toa Lhikan's past. It was said that he came to Metru Nui from some other place, for reasons that he declined to discuss. He served as the lone protector of the city for many, many years, and Matoran in every metru looked up to him. With few threats to Metru Nui, Lhikan was largely kept busy helping the Vahki capture particularly dangerous Rahi.7

Before the coming of the Toa Metru, Toa Lhikan was the lone Toa who stood between Metru Nui and those that would threaten its peace. Toa of Fire and defender of Metru Nui, Lhikan sensed the coming of a great evil. To combat it, he granted Toa power to six Matoran, turning them into new Toa Metru. Lhikan wore the Great Hau, the Mask of Shielding. His two fire greatswords could be combined to form a flying board or a shield.8

Toa Lhikan was the guardian of the city of Metru Nui. He had gone to the Great Temple many times in the past to remember what had gone before and reflect on the future. It had always been a place that had soothed his spirit. Fleeing was against Lhikan's nature.9

Lhikan was a veteran of a thousand conflicts, able to outfight stronger opponents like Krekka hand-to-hand.9

Turaga Lhikan carried a compact item as his tool. He wore the same mask he did as a Toa and was still recognizable as Lhikan, despite his reduced stature and power.9

Lhikan never cared to share details about the battle against the Kanohi Dragon, which suggested that it was an awful battle.10

As a Toa of Fire, Lhikan controlled heat and flame. He could hurl fireballs, melt virtually any substance, create thermal updrafts to slow falling objects, and he had all the abilities of later Toa of Fire such as Vakama and Tahu. He carried two fire greatswords, which could be fitted together to form a shield as well as a flying board.4 Toa Lhikan's mask of choice on Metru Nui was the Kanohi Hau.11, 4 As a Turaga, he wore the Noble Hau.4

Lhikan saw himself as very much of a "big brother" figure to the Matoran. Although he was not native to Metru Nui, he was deeply loyal to his adopted city and its population. When his services were not needed to deal with an emergency, he could often be found spending time with Matoran from various Metru, listening to their problems and offering advice. After Dume was impersonated and became a recluse, Lhikan began resolving disputes and helping make day-to-day decisions in the city.4

According to Nidhiki, Lhikan was worth six Toa in battle during the Toa-Dark Hunter War.12

Tuyet and Lhikan had been friends for thousands of years. They had traveled together, fought together, and once almost died together.13

After his experience of being ordered to abandon his fellow Toa when their Toa tower was attacked by Frostelus, Lhikan swore that he would never run from anything ever again.13

Lhikan was able to find the Nui Stone in Tuyet's dwelling by sensing the heat given off by the stone's energy.13

Tuyet considered Lhikan to be too trusting, so convinced of the purity of Toa.13

Lhikan was a Toa of Fire who led a team that defended the city of Metru Nui in ages past. They performed many heroic deeds, and Lhikan himself became a legend among the Matoran of the city. As of story year 2009, a statue of him still remained in Metru Nui, honoring his courage. Little was known about Toa Lhikan's past, since he rarely liked to speak of it. It was confirmed that he was active as a Matoran 17,500 years ago, when he was rescued by a Toa of Fire named Dume. He became a Toa 7,005 years ago and was assigned to guard a strategic outpost protecting the Makoki stone.14

Lhikan most likely did not come from Nidhiki's homeland.15

Lhikan likely didn't have a badge of office as a Turaga because he was only Turaga for around a few days, most of which he spent as a prisoner.17

Lhikan wasn't one of the universe's most experienced Toa.20