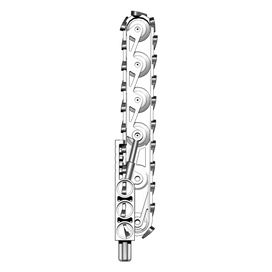 Onua Nuva's quake breakers could be used as high-speed, all-terrain tracks, allowing him to reach anywhere on Mata Nui. They could also be used to carve new passages in the earth.2

Onu Nuva's tools were two quake-breakers that could tunnel through earth and rock; they could be attached to his feet and used as all-terrain treads.3

Even when Onua Nuva lost his elemental powers, he was still able to run his quake breakers and could bore holes into tunnel walls with them. The tools could withstand searing hot temperatures.4