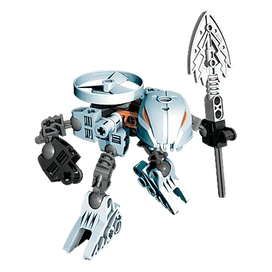 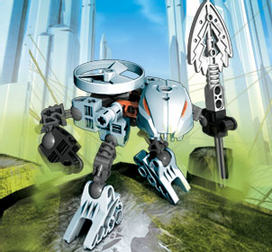 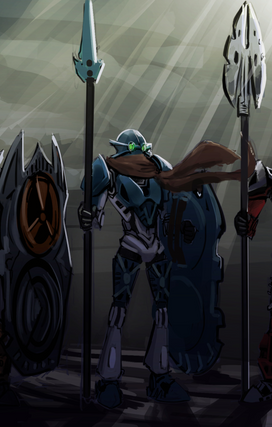 Kualus was a Toa Hagah1 of Ice mutated by Roodaka into a Rahaga. As a Rahaga, he specialized in capturing flying Rahi such as ice bats and Gukko. He carried a Rhotuka spinner with the boomerang power, which would adhere to a flying target and bring it back to him. His staff could be used to send a high-pitched signal to Rahi, summoning them or warning them of danger. Kualus was capable of speaking a strange language that was evidently understood by some Rahi, as well as understanding some of their language. He taught this skill to Toa Nuju.2

Kulus was considered strange even by Rahaga standards, often spending his time talking to flying Rahi in a language composed of clicks and whistles. His Rhotuka boomerang spinner could attach to an airborne creature and bring it back to the waiting claws of Kualus.3

Kualus specialized in winged Rahi and hated going after anything else.4

At least in the alternate universe of the Toa Empire, Toa Kualus had white armor and carried a sub-zero spear.5

Kualus was the only Rahaga who could speak a Rahi language.7