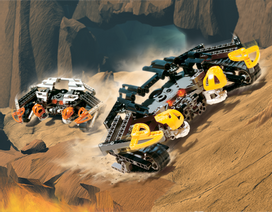 Manas were huge, powerful crab-like Rahi which served as the guardians of Makuta's lair during the time the Matoran were on Mata Nui.1 The word manas was Matoran for "monster."2, 1 It was said that no single Toa could ever hope to defeat one of these creatures. Before the coming of the Toa Mata to Mata Nui, no Matoran on that island had ever seen the Manas and survived to tell the tale. They were so fierce that when not fighting opponents, they would turn on each other. Some theorized that they were more than just Rahi, since they seemed to have some connection to energy towers constructed by Makuta. When those towers were destroyed, the Manas were apparently weakened, giving rise to the thought that they may have been drawing strength or sustenance from the towers. Manas were also found in large numbers in the realm of Karzahni.1

Makuta controlled the Manas, fierce predators with power that no single Toa could withstand.3

The Manas were the most powerful guardians of the evil Makuta. No single Toa could hope to withstand this crab-like beast's fierce claws. Only by combining their powers and skills could the Toa hope to prevail. When they were not fighting the enemies of Makuta, the Manas stayed combat-ready by challenging each other to awesome battles. Like all Rahi, the Manas could be defeated by knocking off their infected masks. No one knew if a mask-less Manas could be tamed, because no one had ever survived an encounter with them.4

Manas were exceptional among Rahi in that they were both strong and smart. They were the most dangerous of Rahi. They were gigantic, crab-like creatures which served as guards of Makuta's underground lair. No single Toa could hope to overcome the Manas. Only by merging their forms into the two Toa Kaita were they able to defeat these creatures. As of mid-story year 2003, no Manas had been seen on the island of Mata Nui in more than a year following that battle. It was uncertain whether other Manas remained at Makuta's command.5

The Manas were large, squat creatures with powerful arms ending in dangerous pincers. They struck their foes with powerful blows from their pincers. A Turaga told Lewa that no single Toa could defeat the Manas alone.6

The two giant Manas crabs which the Toa Kaita fought were later drawn to a cavern by the presence of a Kanohi Kaukau Nuva. The two giant Manas crabs clashed with each other in the huge chamber, striking at each other and then scuttling away, only to strike again. Both were easily three times the size of a Toa, and infinitely more powerful. They were Makuta's guardians, until the Toa defeated them and drove them away. However, it took the six of them, merged into the Toa Kaita, to do it. When they could not fight others, they fought among themselves. Before the Toa came to Mata Nui, none had ever seen them and returned to tell the tale. They were too big to slip by and too fast to avoid. When the Toa Kaita faced the Manas, they defeated them with intense cold. Manas hated the cold, and they fled down to the magma-heated caves to be where it was hot. They were not able to withstand lava. Manas were creatures without fear, but not to the point of stupidity, and they were forced to give ground to a large swarm of Kofo-Jaga.7

According to the Rahaga, the Manas were strange and powerful crab-like creatures whose origin and behavior remained a mystery. The only report of them came from the Toa Metru, who spotted two specimens while traveling from Metru Nui to the island of Mata Nui. They called them "Manas," which was the Matoran word for "monster," due to their size, appearance, and savage manner. The Manas were phenomenally strong, so much so that it was doubtful that any Toa or group of Toa could defeat them unaided. The Toa and Rahaga were generally glad that only two had ever been encountered.8

Whenua suggested that the Manas may have been related to the Ussal crab in some way, although Matau scoffed at this idea. Onewa theorized that the Manas were actually creatures from Metru Nui's pre-history who somehow survived to the present day. Nuju stated he did not care where they came from, only what they might do in the future.8

Manas could be found in Karzahni.9

The Brotherhood of Makuta used Manas as guardians. Zaktan once saw them wipe out a dozen Dark Hunters in a matter of minutes. However, the Brotherhood always said they were just a sample – that the real power was the Mana Ko.10

Manas were large, vicious creatures. They lived in Karzahni in large numbers and served as guards for the ruler. Although Manas seemed to be mostly at home in water, they chose to live in the rocky, arid climate of Karzahni. The Order of Mata Nui speculated that they were simply drawn to the evil of the place.11

Manas in the wild turned on each other at any opportunity. In contrast, Manas in Karzahni were well disciplined. The Matoran of Karzahni lived in fear of the Manas. The mere fact that they guarded the only way in or out of the realm discouraged escape attempts.11

The energy towers in Mangaia were enhancements for the Manas, but they were not essential to their survival.12

Manas were stronger than Sidorak and Roodaka but weaker than Axonn.13

A single Manas could defeat one of the Piraka.14

Kikanalo were not as strong as Manas.15