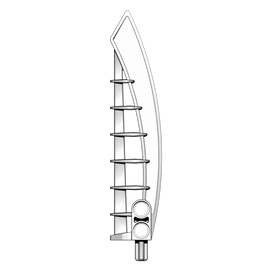 Lewa Nuva's tools were air katana, which allowed him to glide on air currents. One of these was later broken in combat with Reidak, but eventually fixed by Velika.1

Lewa Nuva's air katana could be attached to his body to allow him to glide on wind currents. Combined with the power of Miru Nuva, he could fly high over Mata Nui.2

Lewa Nuva's tools were two sharp blades that could cut through dense jungle growth; they could also be used as glider wings, allowing him to soar above the trees.3

Lewa could fit his twin air katana onto his arms and legs, turning them into glider wings. Lewa could command the wind to keep him flying.4

Lewa's broken air katana could be repaired, as it was just a tool.5