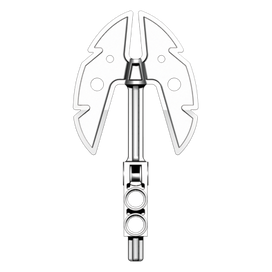 The aqua axes were a pair of axe-like weapons that served as Gali Nuva's Toa tools. Gali used them to channel and focus her elemental power of water. Gali also held a pair of propellers called Mizuni rotors near the handles of the aqua axes. Gali could attach the aqua axes to her feet like flippers while holding the rotors in her hands, allowing her to swim at great speeds underwater.

Gali Nuva's tools were aqua axes. In addition to their cutting edge, they doubled as fins for swimming at great speed.1

Gali Nuva's aqua axes could be attached to her feet to serve as scuba fins. Now there was truly nothing faster or more powerful than her under the water.2

Gali Nuva's tools were two aqua axes, which were powerful enough to slice through the toughest undersea obstacles; they could also be used as scuba fins for faster speeds underwater.3