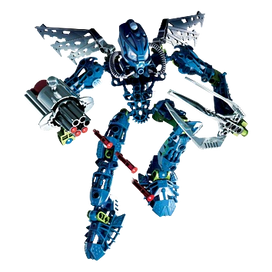 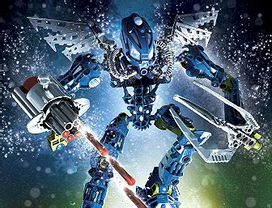 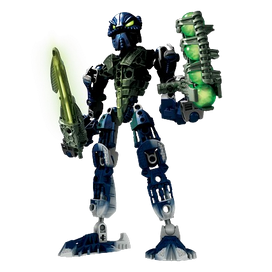 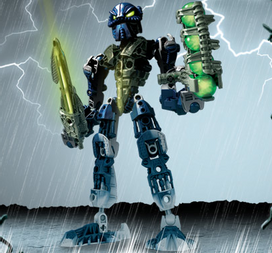 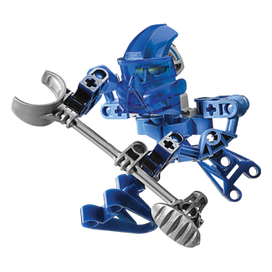 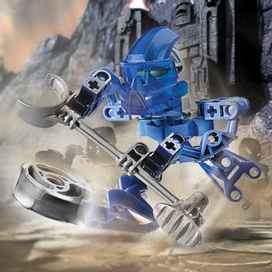 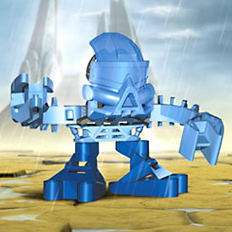 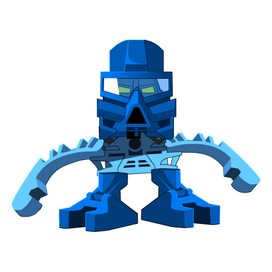 Hahli was a Ga-Matoran1 and Chronicler of the Toa Nuva's adventures, and later a Toa Inika and Toa Mahri.2, 3

Toa Hahli's element was water. She wore the Kanohi Elda, the Mask of Detection. Her weapons were a zamor sphere launcher and laser harpoon. Hahli was possibly the most important of the Toa Inika, for her mask would lead them to the Mask of Life.4

Toa Mahri Hahli's equipment was a Cordak blaster and protosteel talons. Her mask was the Kanohi Faxon, the Mask of Kindred. As Toa of Water, being beneath the ocean made Hahli more powerful than ever before. Her mask allowed her to take on the abilities of other sea creatures, and she could swim at amazing speeds with her new wing-like fins. As of story year 2007, she was designing an underwater version of the sport of kolhii ball.5

Before the coming of the Toa, Hahli spent most of her time fishing and mending nets. She was too shy to voice her ideas or opinions. She was thrust into danger during the Bohrok invasion.2

As a Toa Inika, Hahli wore the Kanohi Elda and carried a laser harpoon and Zamor sphere launcher.6, 2

As a Toa Mahri, Hahli wore the Kanohi Faxon, which she used to duplicate the powers of certain sea beasts.7 She also carried a Cordak blaster and protosteel talons.2

As a Toa she controlled the power of water. Though not as skilled as Gali Nuva, she was a quick learner.2

Although she understood the importance of what the Toa were doing, some part of her still feared the sheer amount of power they wielded. She never wished for a life of constant combat. She had a nagging intuition that tragedy would be the end result of their efforts.2

Although Hahli accepted her transformation into a Toa as part of her destiny, she was never completely comfortable with the power she came to control. As the Toa Inika of Water, Hahli wore the Kanohi Elda, the Mask of Detection, and carried a laser harpoon and zamor sphere launcher.8

When the Toa Inika became the Toa Mahri, Hahli suddenly became the team's strongest member. She was in her element, water, and her skill at swimming and diving made her the best suited to battle the Barraki beneath the sea. As a Toa Mahri, Hahli wore the Kanohi Faxon, the Mask of Kindred, which allowed her to duplicate the powers of sea creatures. She carried a Cordak blaster and protosteel talons.9

As a Toa Inika, Hahli shot charged water that electrocuted her targets.11

Hahli was a student in Metru Nui.12

Hahli would have been a good choice to bear the Ignika, but she had a different destiny.13