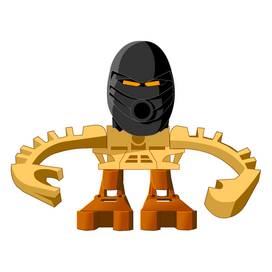 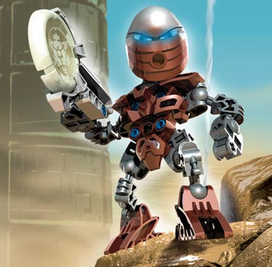 On Metru Nui, Ahkmou was a skilled carver, but he was envious of the accomplishments of Onewa, another carver. Shortly before the Great Cataclysm, Ahkmou discovered the location of the long sought-after Po-Metru Great Disk and became determined to use the information to his advantage. Mercenaries named Nidhiki and Krekka learned of Ahkmou's discovery and recruited him into a scheme to scam five other Matoran into giving them the remaining Great Disks. Ahkmou was stopped by the Toa Metru (including Onewa, who had become a Toa), and he reluctantly joined their cause to defeat the Morbuzakh.

When the Great Cataclysm occurred, Ahkmou was put into forced hibernation in a Matoran sphere along with the other Matoran of Metru Nui. Ahkmou's sphere was among the first six spheres the Toa Metru rescued as they fled Metru Nui, but the sphere was lost to the bottom of a river on the way from Metru Nui to Mata Nui. Makuta Teridax later found Ahkmou's sphere and awakened him. Although Ahkmou permanently lost his memory, Makuta re-educated him about the Matoran's past life on Metru Nui and convinced him that his fellow Matoran were his enemies.

Makuta sent Ahkmou to live among the other Matoran on Mata Nui and do his bidding. Onewa (now a Turaga) allowed Ahkmou to work in Po-Koro as a trader despite being aware of Makuta's influence over him. Shortly after the Toa Mata arrived on Mata Nui to fight Makuta, Ahkmou sold infected Koli balls that spread a plague in Po-Koro. Takua and Pohatu thwarted this plan, forcing Ahkmou to disappear from Po-Koro for some time.

When Ahkmou later reappeared, the Turaga allowed him to return to his job as a trader, wanting to keep a close eye on him. Ahkmou eventually moved to Metru Nui with the other Matoran. When Makuta Teridax seized control of the Matoran universe, he made Ahkmou the "Turaga" of Metru Nui in recognition of his past service to him. After Mata Nui defeated Teridax, Ahkmou moved to Spherus Magna to join the new society forming there, presumably avoiding people who were aware of his past.

Ahkmou was a skilled carver from Po-Metru. He had always been second best at everything he tried. When he found a Great Kanoka disk, he had a chance for revenge.1

Ahkmou was friends with Ehrye; the two sometimes played kolhii [sic] together.2

Ahkmou was a carver in Po-Metru. Ahkmou worked at a workplace apart from his home with other carvers. Ahkmou had his own carver desk where he kept his tools.2

Ahkmou was a master carver, specializing in images of Rahi. His style of carving was very distinctive, making his statues easy to recognize. On Metru Nui, Hafu was one of Ahkmou's coworkers.3

Ahkmou had been to Ta-Metru before BIONICLE Adventures #2: Trial by Fire, although he did not know it well.5

Onewa noted that Ahkmou seemed to be more worried about how many honors he would receive than how much work he finished. This was in contrast to Onewa, who himself took pride in his work.6

Ahkmou used to climb up and down statues for fun.7

On Metru Nui, Ahkmou was a builder and carver, very skilled at a number of things but not a master of any. He came in second to Onewa in everything his whole life, and this led to bitterness and resentment. His discovery of the Po-Metru Great Disk brought him to the attention of two villainous Dark Hunters. They persuaded him to lure five other Matoran into traps and to try to get the other five Great Disks. Ahkmou's plan failed due to the intervention of the Toa Metru. He disappeared shortly after the defeat of the Morbuzakh.8

Ahkmou was a Matoran9 carver originally from Po-Metru. Ahkmou later reappeared on Mata Nui as a trader.10

Ahkmou had not given up on his plans for revenge by the time tales of the Toa Hordika were being told.11

Ahkmou was not punished for his actions on Metru Nui or Mata Nui.12

Ahkmou was misguided. He was not brainwashed, but instead selfish and deceitful.13

Ahkmou was a creep, a being who was simply rotten by nature.14

Ahkmou's mask color becoming black was not a result of Teridax's influence; his mask was not infected.15

Teridax viewed Ahkmou as a pawn. The only value he saw in others was what they could do for him, and Ahkmou wasn't very successful.16

The Turaga's philosophy was to keep friends close and enemies closer. They preferred having Ahkmou where they could keep an eye on him.17