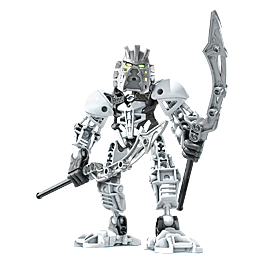 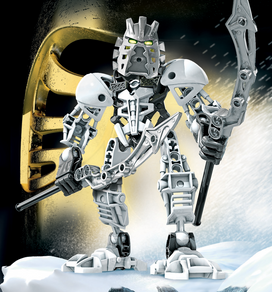 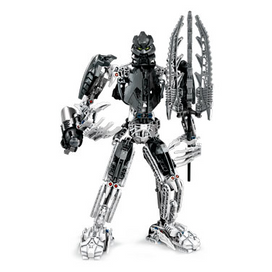 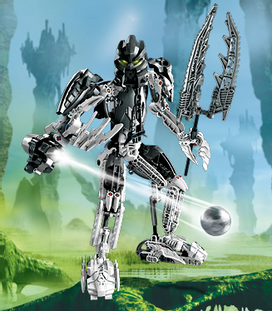 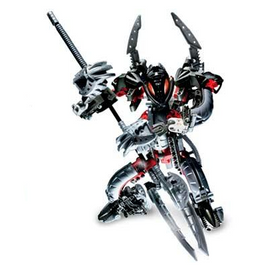 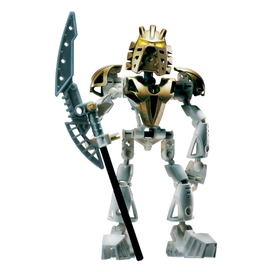 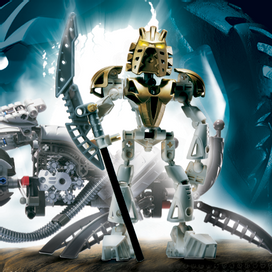 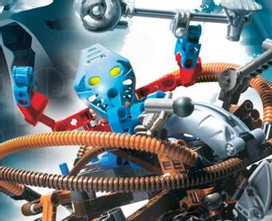 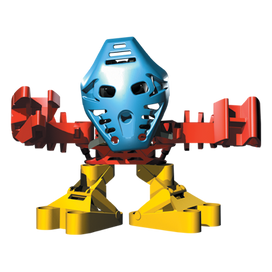 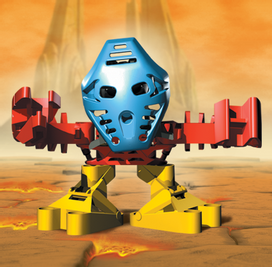 Legend spoke of a Toa of Light who would save Mata Nui from darkness. Takanuva wore the Kanohi Avohkii, the Great Mask of Light, and carried the Kolhii Staff of Light. He rode the Ussanui, a powerful vehicle energized by kraata that could track down the master of shadows wherever he lurked.4

Takua the Chronicler rode his Ussal crab, Pewku, on the search for the Seventh Toa. Takua was always quick to go searching for adventure.4

As a Matoran on Mata Nui, Takua's best friend was Jaller.5

Although Ga-Koro saw few visitors, Takua had been there.6

Takua wandered away from Ta-Koro every chance he got, looking for stories.7

On Metru Nui, Takua was not very skilled as a toolmaker, but he loved to travel more than almost any other Matoran. He was always visited other metru and collecting souvenirs. Through a business in his home called "Takua's Trade Goods," he traded these souvenirs for other things he wanted. Unfortunately, he often liked to make his trips during working hours, and the Vahki had to haul him back.8

On Metru Nui, Takua was among those Matoran who tried to take unscheduled vacations from work. For this reason, he practically rated an entire Nuurakh squad to himself.9

Little was known about Takua's life prior to his arrival on Metru Nui. During the Time Slip, he was transported to Metru Nui in the guise of a Ta-Matoran and given false memories of a life in the city.10

Takua, unknown to himself and all those around him, was an Av-Matoran disguised as a Ta-Matoran.11 Takua was a Matoran.12

On Metru Nui, Takua worked in Ta-Metru as a toolmaker and operated a small business offering souvenirs from other metru he had picked up in his wanderings. Since he often made these trips during his working hours, he attracted a lot of attention from Vahki patrols. A running joke in Ta-Metru was that an entire squad was assigned just to keep watch on Takua.10

On Mata Nui, Takua continued to be more interested in exploring than working.10

After the Matoran of Metru Nui traveled to Mata Nui, the six Turaga appointed Takua to serve as the Chronicler. His position led to his being present at many of the most important events in the island's history.13

He was the chosen Herald of the Seventh Toa and was in fact destined to become Takanuva, the Toa of Light.15 This transformation was only possible for a destined Av-Matoran.10

As Takanuva, he was the Toa of Light, also known as the "Seventh Toa." Matoran legend had stated that in a time of great darkness, a defender would emerge who would wield the power of light. His coming would be heralded by the discovery of the Kanohi Avohkii, the Mask of Light.14

During the Toa Mahri's mission in the Pit, Takanuva remained in Metru Nui, guarding the city.14

Just as Tahu controlled fire and Gali water, Takanuva controlled light. He could illuminate darkness, create blinding flares, focus his power into a laser beam, and create holographic images of himself. He experimented with other potential powers, such as increased speed and the creation of solid light projections.14

Takanuva's personality did not greatly change from when he was a Matoran. He retained his insatiable curiosity about new things and new places and preferred exploring to doing more mundane work. He was awed by the power and responsibility he had as a Toa and by being in the company of Tahu and his other heroes. He proved to be a good student of their training, driving himself hard to master his powers. He did not share with them that he secretly worried that Makuta would return someday and seek vengeance for the defeat at his own hands. Takanuva was determined to be ready should that happen. Takanuva was welcomed into the company of the other Toa, but he still felt most comfortable with his Matoran friends, especially Jaller and Hahli.14

Takanuva carried the Staff of Light, which he could use to channel and direct his powers. He wore the Kanohi Avohkii, the Mask of Light.14

Takanuva was once just a Toa of Light, but an attack by the Makuta left him with power over both light and shadow. Traveling to Karda Nui, he joined with the Toa Nuva in their fight to save the universe. Armed with a power lance and a Midak Skyblaster, he would struggle to free the Matoran from the domination of the Makuta and get them to safety while there was still time.16

After the shadow leech attack, Takanuva's light had been partially drained, leaving him with the ability to fire light from his left hand and shadow from his right.17

Takanuva was considered the most dangerous enemy of the Makuta.18

In Karda Nui, Takanuva carried a power lance from which he could fire a burst of light. Takanuva had the newfound ability to fly as a result of a Makuta virus he was exposed to in an alternate universe. His armor and mask had also darkened as a side-effect of the shadow leech attack on Metru Nui. He also grew in size upon arriving in Karda Nui for reasons he did not understand. Takanuva's dark side urged him to attack, and he found it harder and harder to resist those impulses. Takanuva could fire blasts of light from his power lance and could unleash blasts of shadow from his right hand.19

Takanuva came to know that he must have been a Matoran of Light in the past, though those memories were blocked.19

Gali was able to forge a mental link with Takua/Takanuva which allowed him to see through her eyes. Gali was also able to read Takanuva's memories in an instant.19

As a Matoran, Takua had looked up to the Toa and dreamed of being like them.19

Although Toa had a code against killing their enemies, when the Makuta were destroyed by the energy storm in Karda Nui, Takanuva felt no remorse. He believed that they had brought in on themselves by choosing to tamper with the natural order of their universe in a petty effort to seize power, and now the universe was setting itself right.19

Takanuva kept a diary of his adventures starting when he arrived in Karda Nui.19

As a Matoran living in Ta-Koro, Takua never felt he fit in. He was not content to work all day long and never get to travel and see the island. As a result, he often wandered away from his job, to Turaga Vakama's chagrin. What no one on Mata Nui knew was the Takua was not a Ta-Matoran at all, but an Av-Matoran, a Matoran of Light, in disguise. As Takanuva, he wore the Kanohi Avohkii, the Mask of Light, which could project powerful beams of light energy and banish the darkness. It could also bring understanding, turning anger into peace and enemies into allies. Takanuva's control of light allowed him to create everything from blinding flashes to pinpoint laser beams. His power was focused through a Staff of Light which he carried.20

Having survived an attack by a shadow leech on Metru Nui, Takanuva found his powers changed. Though he was still the Toa of Light, much of his light had been drained, leaving darkness in its place. As a result, he could fire light only from his left hand, and shadow from his right. Upon his arrival in Karda Nui, he grew larger, as his body absorbed the energies of Karda Nui. He wore the Kanohi Avohkii, the Mask of Light. He carried a power lance and a Nynrah ghost blaster [sic, Midak skyblaster], both of which he acquired in an alternate dimension before arriving in Karda Nui.21

Takua's leg color changed as a result of his rebuilding.22, 23

Part of the reason that Takua was outcast was that unity and duty are very important on Mata Nui, and going off one one's own and ignoring one's tasks, regardless of the reason, tended to be frowned upon.24

The reason the Mask of Light led Takua and Jaller all over Mata Nui before taking them to the Kini-Nui was because Takua needed to time to learn to accept his responsibility before he was ready to take it on.25

Takanuva would not have been able to stop all of the Rahi and Bohrok on his own had the Toa Mata never arrived.26

Takua was destined to become Takanuva.27

Takua would not have become a Toa if he donned the Avohkii before the Great Cataclysm because there was no need for a Toa of Light at the time. He was always destined, but it had to be the right time.28

The Toa Nuva regarded Takanuva as a member of their team despite the fact that he wasn't a Toa Nuva.29

Takua might not have been a Ta-Matoran, as evidenced by how he never fit in completely in Ta-Koro.30

Takua was a Matoran of Light.31

Takua was not originally from Metru Nui.32

Takua's red and blue colors were an attempt to disguise him because a white and gold Matoran would be obvious.33

Takanuva looked like a Toa Nuva because he was familiar with the body shape of Toa Nuva.35

Takua did not wear a Pakari before he was made to look like a Ta-Matoran.36

When he had his shadow powers, Takanuva couldn't access the shadow Matoran powers.37

Takanuva had the potential to use Av-Matoran abilities, but not the training.38

Takanuva's light powers were not decreased by gaining shadow powers. He could only use them from one hand.39

Takanuva's destiny may have been grander than defeating Teridax.40

Takanuva's destiny was to defeat Makuta.41

Takanuva did not have the same destiny as the Toa Nuva.42

Takanuva's destiny was not complete as of the end of story year 2008.44

A Toa's ability to complete their destiny without their team depended on what their destiny was. Takanuva fought alongside the Toa Nuva, but had a different destiny from them.45