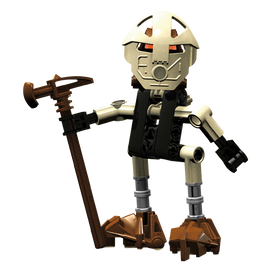 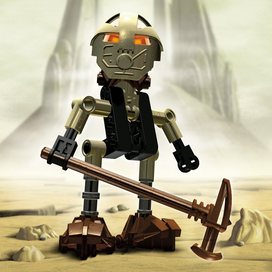 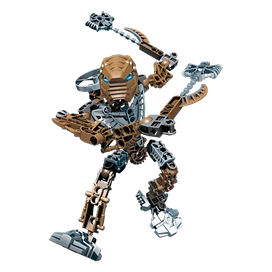 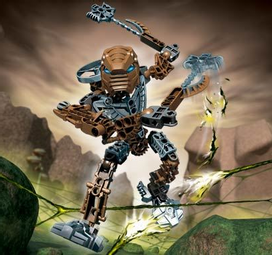 Turaga Onewa related the legends of Pohatu and led the desert village of Po-Koro.1

Turaga Onewa's color was brown, his village was Po-Koro, and his mask was the Kanohi Komau, the Noble Mask of Mind Control. His tool was the great stone hammer. He was nicknamed the Referee for his swift [sic] decisions and willingness to stand behind them.2

Onewa once taught Pohatu how to collapse a pile a stone by laying his hands on it and carefully identifying the stone which supported all the others. Once this stone was found, destroying it would collapse the pile. Onewa told Pohatu that his knowledge of rock was older than the rocks themselves, although Pohatu was not sure what he meant.3

Toa Onewa was the protector of Po-Metru, home of the carvers. Using his proto pitons, the Toa of Stone guarded the Sculpture Fields and other important Po-Metru sites.4

Toa Onewa was the Toa Metru of Stone. Onewa had little patience for Vakama's visions and preferred to act first and ask questions later. No matter the odds, Onewa would always find a way to win. He wore the Kanohi Komau, the Great Mask of Mind Control.5

As a Toa, Onewa was not able to run especially fast, even at full speed. His body was built for strength, not sprinting. Even Ahkmou could move faster than him through the Sculpture Fields.6

As a Toa, Onewa's new body was far stronger than his Matoran form had been.7

When Onewa brought the Toa stone to the Great Temple, he certainly never imagined that his whole life was about to change. He also would not necessarily have picked the other five Toa Metru to become his fellow Toa. He thought that Vakama was too much of a dreamer, Nokama seemed a little stuck on herself, Matau was simply annoying, and Nuju and Whenua argued constantly. Still, he thought that they must have been chosen for a reason. Just as a Po-Metru crafter carefully selected the right tools for a job, so the Great Spirit Mata Nui must have had a plan in mind when he chose the six. What it could be, Onewa had no idea. He even wondered if there had been a mistake and that the wrong Matoran had been chosen. Still, he was determined to make the most of it, just as a crafter given a bad carving tool worked with what he was given.7

Toa Onewa was strong-willed, sharp, and stubborn. A former carver, he was most comfortable with things he could see and touch, and he had little patience for Vakama's visions. Onewa preferred doing to talking, and he thought the Toa spent too much time planning and debating. He was extremely daring and refused to consider the possibility of defeat. As of mid-story year 2004, Onewa had not made any close friends among the other Toa, but this did not seem to bother him. He particularly liked to needle Nuju and Whenua, since he thought worrying about the past or the future was a waste of time.8

Toa Onewa's element was stone, and his Toa tools were proto pitons.8

In an assemblers' village, Onewa would work hard in the heat all day to finish a piece of carving without noticing the time or effort. To him, it was all worth it when the work was done and another fine display of craftsmanship was ready to ship out. He knew that other Po-Matoran in the huts felt the same way, except perhaps Ahkmou.9

Onewa was the Toa Metru of Stone and later Turaga of Po-Koro.10

As a Matoran, Onewa worked as a carver in Po-Metru.10

Onewa was the master of stone. He could cause jagged pillars of stone to erupt from the ground, stone hands to grab enemies, or stone walls to form around a target. He also had the ability to shatter stone at will.10

As a Toa, Onewa was courageous and daring, although not always easy to get along with. He was always quick with a wisecrack and frequently made Vakama and Whenua the butt of his jokes. Like Matau, he appreciated the thrill of being a Toa, although he also recognized it as a serious business. Perhaps because he had provoked so many arguments as a Toa, he became skilled at resolving them as a Turaga. Where once he lived only for the present, he came to see the virtues of awareness of both the past and the future.10

As a Toa Metru, Onewa carried twin proto pitons and wore a great Kanohi Komau, the Mask of Mind Control. As a Toa Hordika, he carried twin claw clubs, which could hurl stones or energize his Rhotuka spinner.10 As a Turaga, he carried a stone hammer and wore a noble Komau.10, 11

The stone hammer was Turaga Onewa's tool and badge of office.12

Onewa was a Po-Matoran carver in Metru Nui when he became the Toa Metru of Stone. As a Toa Metru he wore the Kanohi Komau, the Mask of Mind Control, and carried twin proto pitons. From the start, he was skeptical of Vakama's leadership and quick to insult the Toa of Fire. He could be impatient and temperamental and often seemed to expect the worst. It was only with great effort that he and Vakama were able to work together to find the Great Disks and defeat the Morbuzakh. After becoming a Toa Hordika, Onewa found it hard to control his rage. As a Turaga, Onewa learned from his past mistakes and turned into a fine leader of the village of Po-Koro. He was nicknamed "the referee" because he always tried to resolve any arguments among villagers fairly.13