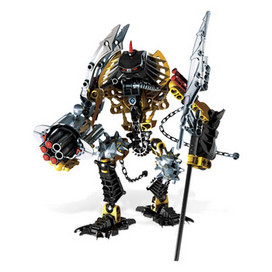 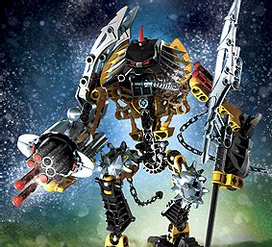 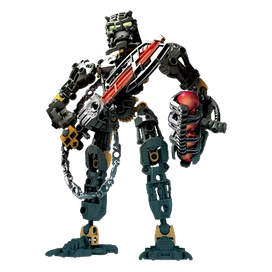 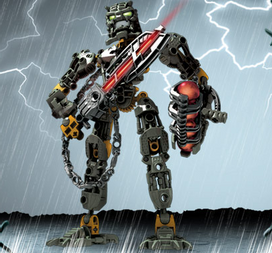 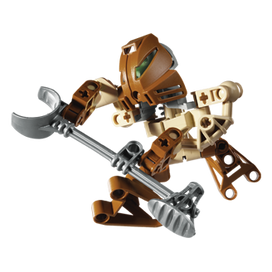 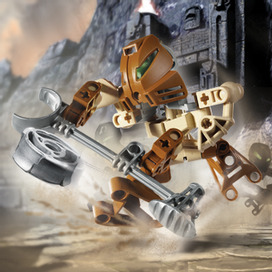 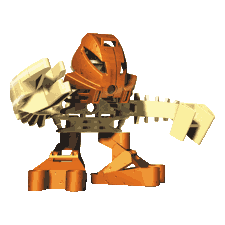 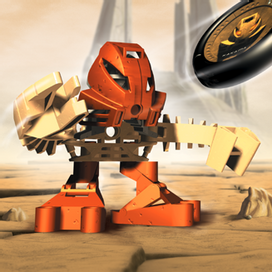 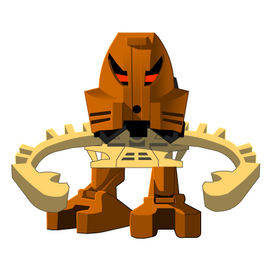 Hewkii, formerly known as Huki, was a Po-Matoran1 and later Toa2 of Stone who was part of the Toa team which recovered the Kanohi Ignika to save the life of Mata Nui.

Huki claimed that he always missed the target when throwing disks and was eager to practice.3

Huki came from the village of Po-Koro and wanted to learn all he could about Toa Pohatu.4

Hewkii's color was brown. He was the all-time top scorer at the sport of kolhii. He was one of the few Matoran strong enough to crush boulders with his head as well as his feet.6

On Metru Nui, Hewkii was the most skilled disk maker in all of Po-Metru, and his Kanoka were considered the best for use in sport. Matoran from other metru were known to come to Po-Metru to trade for Hewkii's disks. This forced Turaga Dume to create a rule that players from other metru could not use Po-Metru disks in city-wide tournaments.7

As a Po-Matoran, Hewkii was a carver and diskmaker. He was later a Toa Inika and Toa Mahri. While he lived on Metru Nui, he was famous throughout the city for the quality of his Kanoka disks. On Mata Nui, he was a Kolhii champion and a trusted aide to Turaga Onewa. He was one of the only Po-Matoran strong enough to crush rocks with both his feet and his head. Athletic and powerful, he led the Po-Koro team to numerous Kolhii championships and won the Copper Mask of Victory multiple times. He was credited with inventing the most popular and recent form of Kolhii when he used his staff to save Maku from a flying rock during the Bohrok invasion.8

The transformation into a Toa Inika changed the color of his armor from brown to yellow and gray. Hewkii was somewhat disturbed by the fact that no one else in the team commented on this.8

Like Pohatu Nuva, Hewkii controlled the power of stone. He was particularly adept at slinging boulders, given his past history as a Kolhii champion.8

Hewkii never asked to be a Toa, but he understood that there was a job that needed to be done. His attitude was that the faster they did it, the faster the team could return to Metru Nui and see their friends again. He was a strong believer in being a team player, but he did not have much patience for sitting around and making complicated plans.8

As a Toa Inika, Hewkii wore the Kanohi Sanok9 and carried a laser axe and climbing chain.8

As a Toa Mahri, he wore a great Kanohi Garai and carried an aqua warblade.10, 8

When they transformed, even the colors of the Toa Inika's armor were changed by the lightning. Toa Hewkii was the first Toa of Stone in memory to be a shade other than brown.11

Toa Hewkii's element was stone. His mask was the Kanohi Sanok, the Mask of Accuracy. His weapons were a zamor sphere launcher and laser axe. Hewkii treated being a Toa much like a sport. Just as in kolhii games, "lose" was not in his vocabulary.12

Toa Mahri Hewkii's equipment was electrified chains, an aqua warblade, and a Cordak blaster. His mask was the Kanohi Garai, the Mask of Gravity. The Toa of Stone was not at home in the water, but his Mask of Gravity made him one of the fiercest Toa Mahri in a fight. Even Carapar felt a moment of fear when he saw Hewkii coming his way. Hewkii was very, very happy that he once took swimming lessons.13

When Hewkii became a Toa, he had one thought in mind: the faster the Toa Inika found the Mask of Life, the faster he could get back to Metru Nui, to his friends and to his old life. He did not want to waste time on complicated strategies or long-range plans. Instead, he preferred a more direct, smash-and-find approach. Jaller named Hewkii deputy leader of the team. As the Toa Inika of Stone, Hewkii wore the Kanohi Sanok, the Mask of Accuracy, and carried a laser axe, climbing chain, and zamor sphere launcher.14

The very last place a Toa of Stone wanted to be was underwater. Despite this, Hewkii scored more than his share of victories while in the Pit, helping to save his fellow Toa Mahri and pave the way for the revival of Mata Nui. Among Hewkii's greatest deeds as a Toa Mahri were twice defeating a 300-foot long venom eel, battling the ferocious Gadunka, and overcoming an entire school of Takea sharks to stop them from pursuing Matoro. As a Toa Mahri, Hewkii wore the Kanohi Garai, the Mask of Gravity. He carried a Cordak blaster and an aqua warblade.15

Hewkii Inika was not physically stronger than Pohatu Nuva.16

As a Toa Inika, Hewkii's chain was always connected to his axe and back.17

Hewkii had a right hand in his Toa Mahri form.18