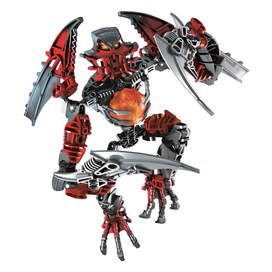 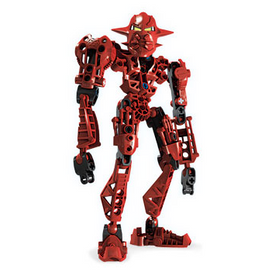 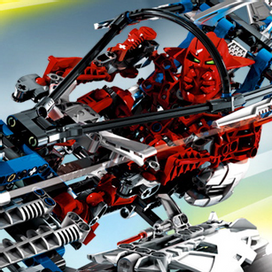 Makuta Antroz was a member of the Brotherhood of Makuta and one of its most skilled tactical commanders. He was an aggressive warrior and a good strategist and leader. Antroz led the team of Makuta which Teridax sent to Karda Nui to subdue its Av-Matoran population and oppose the Toa Nuva's mission to awaken Mata Nui. When Antroz's team arrived in Karda Nui, Antroz took a team consisting of Chirox, Vamprah, and Mutran to patrol the skies of Karda Nui near the Av-Matoran sky villages, while sending another team of Makuta to the swamp below. Antroz's team started using Tridax pods filled with shadow leeches to turn the Av-Matoran into shadow Matoran. When Toa Matoro used the Mask of Life in Karda Nui to save Mata Nui from death, the burst of light permanently blinded Antroz, forcing him to rely on the shadow Matoran Radiak to see. Antroz and his team later fought against Kopaka Nuva, Pohatu Nuva, and Lewa Nuva when they appeared in the skies of Karda Nui. When the Makuta fought the Toa Nuva at the Codrex, Antroz briefly hijacked the Jetrax T6 vehicle and used it against the Toa before being forced to abandon it. Antroz was eventually killed by the energy storms in Karda Nui following Mata Nui's awakening, according to Teridax's plans.

Makuta Antroz was the leader of the Makuta in Karda Nui and one of the Brotherhood's most skilled tactical commanders. He was smart enough not to make the common Makuta mistake of underestimating his foes and even fought with some sense of honor (a rarity among Makuta). Antroz wore the Kanohi Jutlin, the Mask of Corruption, which could rot any object. He was capable of flight and had claws and poisonous fangs. He also carried a Tridax pod filled with shadow leeches. Due to exposure to the explosion of light that accompanied Mata Nui's return to life, he lost his sight and had to rely on a shadow Matoran, Radiak, to navigate.1

Antroz was the leader of the Makuta in Karda Nui. He was an aggressive warrior. He wore the Kanohi Jutlin, the Mask of Corruption, which caused items to rot and break down. Radiak flew with him, using his special power to slow the actions of the Toa and make them easy targets. Antroz was a strategist and an excellent leader.2

After it was captured from the Dark Hunters during a battle with Brotherhood of Makuta forces, the Destral Cycle became a favorite vehicle of Makuta Antroz.3

When Antroz and Radiak were physically linked, both gained new abilities. Antroz was able to see through Radiak's eyes via a mental link. Radiak was able to slow opponents, making them feel too lazy to act.4

Antroz had a team of Toa Hagah.5