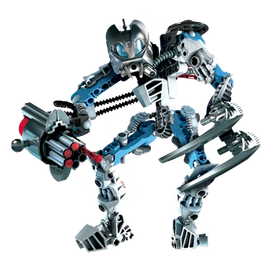 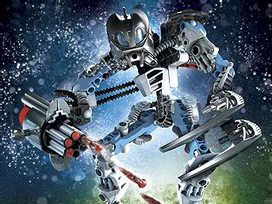 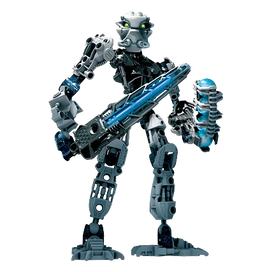 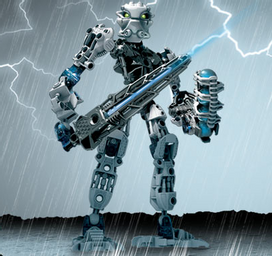 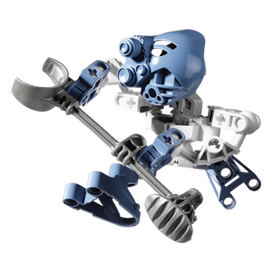 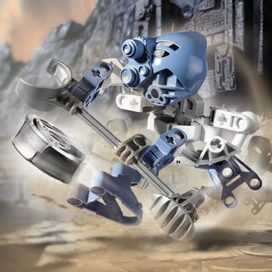 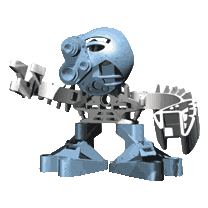 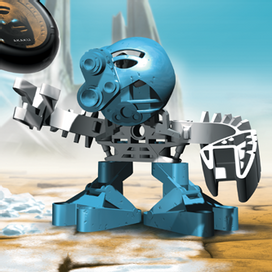 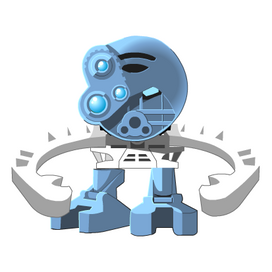 Matoro was a Ko-Matoran1 and later Toa2 of Ice who sacrificed his life to save the life of Mata Nui using the Kanohi Ignika.

Matoro loved to climb steep mountains and slide down icy slopes, throwing discs as he went.3

As a Matoran, Matoro stayed by Turaga Nuju's side to interpret his whistles and gestures.4 His color was bluish silver. He acted as interpreter for Turaga Nuju, translating his gestures and whistles into words. Matoro had seen much of the island of Mata Nui, as he traveled everywhere Nuju went.5

On Metru Nui, of all the Ko-Matoran, only Matoro enjoyed a good relationship with the Onu-Matoran. He spent much of his time in the Archives, studying different Rahi, trying to master their languages and behavior patterns. Now and then he came upon small creatures that the Archives were not interested in, and these he traded to other Matoran who were seeking pets. This business was called Matoro's Rahi.6

Toa Matoro's element was ice. His mask was the Kanohi Iden, the Mask of Spirit. His weapons were a zamor sphere launcher and an energized ice sword. Matoro was still a little uncertain as a Toa. His destiny was connected to the Mask of Life in ways even he did not suspect.7

Toa Mahri Matoro's equipment was a Cordak blaster and a twin cutter. His mask was the Kanohi Tryna, the Mask of Reanimation. Destined carrier of the Mask of Life, the Toa of Ice found the Pit full of darkness, danger, and horrible secrets. Using his Mask of Reanimation, he could return artificial life to dead sea beasts and challenge the armies of the Barraki. He had actually started learning some of the language of the sea creatures.8

Matoro was a Ko-Matoran and translator for Turaga Nui and later a Toa Inika and Toa Mahri. He was the destined bearer of the Kanohi Ignika.9

Matoro's most important role on the island of Mata Nui was easily as aide to Turaga Nuju. Only Matoro could fully understand Nuju's strange language of clicks and whistles. It was his job to translate for the Turaga, even at the councils of the village leaders. This put him in the uncomfortable position of having knowledge he could not share with the other Matoran, or having to translate some of Nuju's ruder comments to Turaga and Toa alike.9

Matoro was never entirely comfortable as a Toa, feeling that his background as a scholar did not leave him well-suited for the role.9

Matoro was humbler and less cold as a Toa than Kopaka.10

Matoro was not cowardly, but rather reluctant. He was not a warrior by nature, so he reacted to things differently than Matoran like Jaller.11

Like Kopaka Nuva, Toa Matoro controlled the element of Ice.9

Matoro grew used to the burden of keeping secrets. During his time on the island of Mata Nui, he learned many things from sitting in on Turaga meetings, none of which he could share with his fellow Matoran. Although he first doubted his fitness to be a Toa, his experiences on Voya Nui increased his confidence. His relationship with Jaller became strained as a result of the importance of his role with regard to the Ignika.9

Matoro was never comfortable with the idea of being a Toa. He was not a warrior like Jaller or Kongu, an athlete like Hewkii, a scholar like Hahli, or an inventor like Nuparu. He was simply a translator for Turaga Nuju and certainly not qualified to be a hero as far as he was concerned. Still, he did his best, battling the Piraka with great courage. As the Toa Inika of Ice, Matoro wore the Kanohi Iden, the Mask of Spirit, and carried an energized ice sword and a zamor sphere launcher.14

Matoro had spent many years keeping secrets, the result of having heard so many as Turaga Nuju's translator. No secret was more difficult for him to keep than knowing that Makuta was in possession of the Maxilos robot while in the Pit. As a Toa Mahri, Matoro wore the Kanohi Tryna, the Mask of Reanimation, and carried a Cordak blaster and twin cutters.15

Matoro was not revived on the red star because he no longer had a body.16, 17

After his death, it was not possible to revive Matoro via the Mask of Life or some other means.18

Matoro's destiny was to carry the Ignika, but not by wearing it.19

The Ignika chose Matoro as its guardian because he possessed qualities the other Toa Inika did not. Toa like Hewkii and Kongu were beings of action, athletes, and military leaders while Matoro was a thinker, among other things, and had a past interest in Rahi that showed his deep-seated respect for life.20