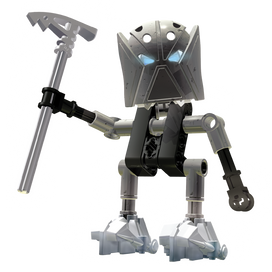 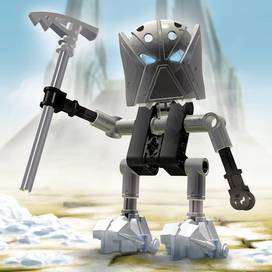 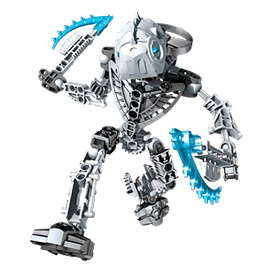 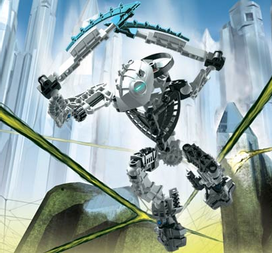 Turaga Nuju was the leader of the icy village of Ko-Koro. He was famous for his storytelling abilities. He communicated using gestures for some particular reason.1

Turaga Nuju's color was silver, his village was Ko-Koro, and his mask was the Kanohi Matatu, the Noble Mask of Telekinesis. His tool was the great ice pick. He was an excellent storyteller, although he never spoke. Nuju communicated only through whistles and gestures; Matoro stayed by his side to interpret.2 Matoro acted as interpreter for Turaga Nuju, translating his gestures and whistles into words. Matoro traveled everywhere Nuju went.3

Turaga Nuju, always communicating through his interpreter Matoro, could be impatient at Turaga council meetings, having little patience for long-winded arguments from Turaga like Whenua. In all the time Nuju had known Nokama, he was never able to say no to her for long. Nuju communicated through whistles, clicks, and complicated gestures, which Matoro interpreted for others to understand.4

From high atop the crystal Knowledge Towers, Toa Nuju watched over Ko-Metru, home of the scholars. His crystal spikes let him swing from tower to tower as he searched for the Great Disk.5

Toa Nuju was the Toa Metru of Ice. Nuju guarded the Knowledge Towers of Ko-Metru against any threat. He had little patience with Toa who wanted to waste time talking instead of doing. He wore the Kanohi Matatu, the Great Mask of Telekinesis.6

As a Matoran, Nuju was once a seer in Ko-Metru. Normally, his eyes were on the sky, seeking to read the future from the brightness and movement of the stars. He was once one of the scholars who toiled in the crystal Knowledge Towers. There they pored over the written records of Metru Nui, deciphered ancient prophecies, and crafted predictions of the future. As a Matoran, Nuju spent most of his life in Knowledge Towers.7

Before becoming a Toa, Nuju's job was to scan the skies searching for hints of what the future held for Metru Nui. He considered the Archives to be a monument to a dead past.8

Before becoming a Toa, as a Matoran in Ko-Metru, Nuju had been an important scholar with vital responsibilities.8

Nuju hated listening to the other Toa Metru's arguing and Matau's bad jokes. He wondered if, after presenting themselves at the Coliseum, he could go his own way and simply be the Toa of Ko-Metru.9

Nuju found the realization that he would no longer be a Ko-Metru seer but instead the guardian of an entire metru to be disturbing. He had even thought that once the Morbuzakh was defeated, he and the others would become Matoran again.9

Toa Nuju's element was ice, and his tools were twin crystal spikes. He wore the Kanohi Matatu, the Great Mask of Telekinesis.10

When Nuju was a Toa as of story year 2004, to some, Nuju seemed unfriendly and cold, and in some ways this was a true picture of him. At heart, he was simply used to working alone and not having to deal with others, and being in a team was not a comfortable situation for him. He made it clear that he was willing to accept Vakama as leader "as long as he does not expect me to follow." What he really wanted was the chance to go back to his work in Ko-Metru and forget about saving the city. Nuju respected Nokama, could tolerate Vakama, and managed to set aside at least a few of his differences with Whenua. Onewa and Matau got on his nerves, and he preferred not to work with them.10

As a Toa, Nuju tried to focus on the future and expressed disinterest in the past; for example, on the topic of the origin of the Manas, Nuju stated the he cared only what they might do in the future.11

Nuju was the Toa Metru of Ice and Turaga of Ko-Koro.12

Nuju became one of the most skilled of all the Toa Metru at solving mysteries, applying careful logic and keen powers of observation.12

As a Toa, Nuju was the master of ice. He could cause ice storms and blizzards, travel via ice slide, and create virtually anything out of ice.12

Nuju's personality changed little between his time as a Matoran, Toa Metru, and Turaga. He was impatient with fools, had no use for those who did not plan for the future, and was more than willing to use his cutting wit to voice his dislike of anyone or anything. Despite this, his razor-sharp mind and incredible analytical skills made him a valuable ally. Like all residents of Ko-Metru, his attention was always on the future and thinking ahead. He helped the Toa Metru escape extremely dangerous situations more than once.12

The Ice Pick of Nuju was Turaga Nuju's tool and badge of office.14

Ihu was a Ko-Matoran who mentored Nuju at the start of his career in the knowledge towers. Ihu taught Nuju that the most important thing in life was what one learned while living and how one used that knowledge.15

Nuju was originally a scholar in Metru Nui. He was not happy about becoming a Toa, since it took him away from his work. Still, he was a powerful member of the Toa Metru, best known for his skill at solving mysteries and his ability to think ahead. He was never really comfortable being in a team, and he often wished for the chance to simply go back to defending Ko-Metru. As a Toa Metru, Nuju wore the Kanohi Matatu, the Mask of Telekinesis, and carried twin crystal spikes. When the Toa Metru turned into Toa Hordika, Nuju learned the language of the Rahi. After he became the Turaga of Ko-Koro, he continued to speak only in that language. It was his way of reminding the others of the dangers of overconfidence and pride, the qualities that had led them into the Visorak ambush years before.16

As a Matoran, Nuju was a seer of some influence, enough to keep Ehrye from being hired.17

Nuju was somewhat like Kopaka, in that he would really prefer to be left alone. His focus had always been on the future and he felt that protecting Ko-Metru should come first before anything else.18

Nuju felt that if someone wasn't willing to make the effort to understand him, they were not worth his time to talk to.19