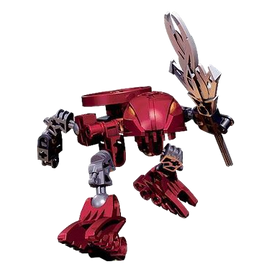 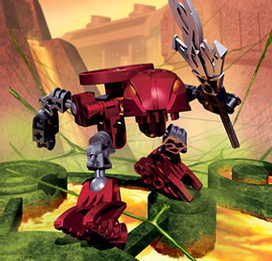 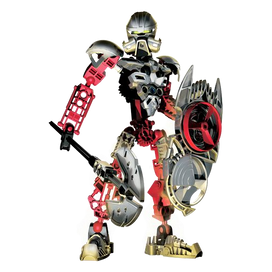 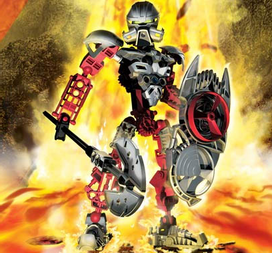 Norik was a Toa Hagah2 of Fire who was mutated into a Rahaga by Roodaka. He was the leader of an elite Toa team assigned to Makuta's personal guard.3

Wise and able, Norik was respected by the other Rahaga, even if not all of them shared his belief that the Toa Hordika could be cured. He used his staff and his fluid movements to distract Rahi reptiles until his Rhotuka snare spinners could trap them.4

Norik firmly believed in the myth of Keetongu and insisted to the other Rahaga that he was real.5

As a Toa, Norik carried a lava spear and a mechanical6 Rhotuka launcher whose spinner had the ability to slow an opponent.3 He wore a Great Kanohi Pehkui, the Mask of Diminishment.3, 7

As a Rahaga, Norik specialized in capturing Rahi reptiles and other crawling creatures such as furnace salamanders. He carried a Rhotuka launcher with the snare power, which tangled a target's limbs. His staff could be used to distract his target until he was ready to strike.3

Norik was a brave hero and was the leader of the Toa Hagah.8

The Toa Hagah wore masks carved in the shape of the masks of past heroes as a tribute to them. A standard Pehkui didn't look like a Kiril, but Norik's did because it was worn by a Toa Hagah and therefore carved that way as a tribute.9