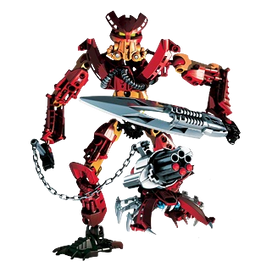 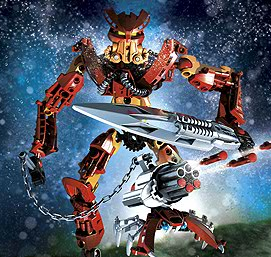 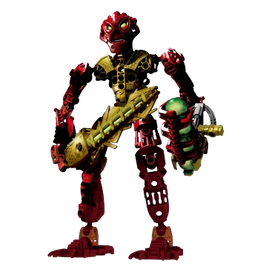 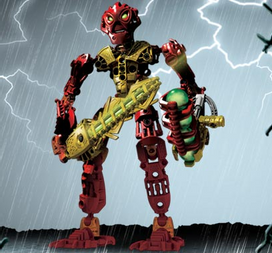 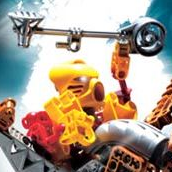 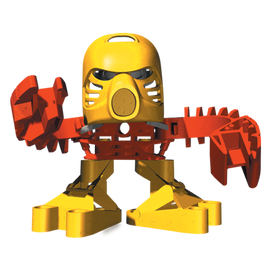 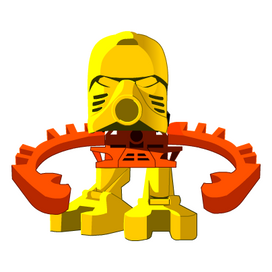 Jaller, formerly known as Jala, was a Ta-Matoran1 and later Toa2 of Fire who led the Toa team which recovered the Kanohi Ignika to save the life of Mata Nui.

Jala led the guard in Ta-Koro, commanding its warriors. Maku once felt annoyed that Jala ordered Matoran from other villages around like they were members of the Guard.3

Tough and smart, Jala led the Guard in the village of Ta-Koro.4

Flying a Gukko bird was not easy, but no challenge was too great for Jaller, Captain of the Ta-Koro Guard. He led the search for Takanuva, determined to save the Matoran from the shadows of Makuta. With only his courage and his kolhii staff, he braved every danger to fulfill his mission.5

As a Matoran, Jaller's color was yellow. He was captain of the Ta-Koro Guard, and he was responsible and dedicated to his job. His best friend was Takua the Chronicler.6

Toa Jaller's element was fire. His mask was the Kanohi Calix, the Mask of Fate. His weapons were a zamor sphere launcher and energized flame sword. Jaller was the leader of the Toa Inika. He was determined not to repeat the errors of past Toa of Fire.7

Toa Mahri Jaller's equipment was an aquatic power sword and a Cordak blaster. His mask was the Kanohi Arthron, the Mask of Sonar. It was not easy for the Toa of Fire to fight and win underwater, but Jaller had the skill to succeed. Aided by a Hahnah crab with a mounted Cordak blaster, Jaller led his team into battle in the depths of the Pit. His mask allowed him to spot enemies even in the black waters around Mahri Nui.8

Jaller was the Ta-Matoran captain of the Ta-Koro Guard9 and later a Toa Inika and Toa Mahri.10

Jaller was employed as a tool maker on Metru Nui and was close friends with Takua, another worker. He was often kept busy covering for Takua's wanderings with the Vahki to keep his friend out of trouble. Jaller's Kanohi mask was badly damaged in transit to Mata Nui. Turaga Vakama replaced it with the late Turaga Lhikan's noble Hau. Since he was a Matoran, Jaller could not access the mask's power. Jaller showed great heroism during the Bohrok invasion.10

As a Toa, Jaller controlled the power of fire like Tahu Nuva. He wanted to break the archetype set by Vakama and Tahu and be a Toa of Fire who respected and listened to the opinions of his teammates. He did a good job of this but had some resentment toward the more prominent role which Matoro took on the team. He was also still haunted by the memory of dying as a Matoran. As a Toa Inika, he wore the Kanohi Calix and carried an energized flame sword. As a Toa Mahri, he wore the Kanohi Arthron and carried a Cordak blaster and aquatic power blade.10

Jaller was not a hothead like Tahu. By the time he became a Toa, he had spent 1000 years leading the Ta-Koro Guard. During this time, he learned to think before reacting.11

In the alternate universe of the Toa Empire, Jaller wore a red Kanohi Komau.12

In his days as Captain of the Ta-Koro Guard, Jaller learned a thing or two about battle strategy.13

As team leader of the Toa Inika, Jaller set out to learn from the mistakes of Vakama and Tahu. Rather than just give orders and charge ahead, he tried to take the time to listen to and learn from his teammates. Although he was always brave in battle, he could not escape the memory of dying as a Matoran on the island of Mata Nui. Even though he was returned to life by Takutanuva, the experience sometimes made him hesitate at crucial moments. Jaller led the fight with the Piraka and Brutaka. As the Toa Inika of Fire, Jaller wore the Kanohi Calix, the Mask of Fate, and carried an energized flame sword and a zamor sphere launcher.15

At first, Jaller found the Toa's experiences in the Pit to be extremely frustrating. Matoro, knowing he was the destined wearer of the Mask of Life, was taking on more of a leadership role. Hahli, happy to be in her native element, kept swimming off on her own. Worst of all, as a Toa of Fire, he had to struggle even to use his element in the depths of the sea. Still, Jaller knew the most important thing was the mission they needed to achieve. He fought bravely against the Barraki, led the evacuation of the Mahri Nui Matoran to Voya Nui, and succeeded in obtaining the Mask of Life and passing it on to Matoro. As a Toa Mahri, Jaller wore the Kanohi Arthron, the Mask of Sonar. He carried a Cordak blaster and an aquatic power blade. For a brief time, he was assisted by a Hahnah crab.16

Jaller remembered being dead. This did not make him more afraid to die, but instead more aware of the possibility it could happen again.17

It was hard to say what Jaller remembered about his time being dead, as he didn't like to talk about it.18

Jaller was the leader of the Toa Inika.19