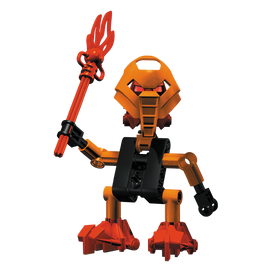 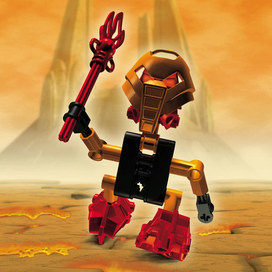 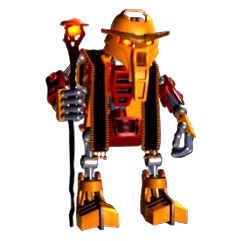 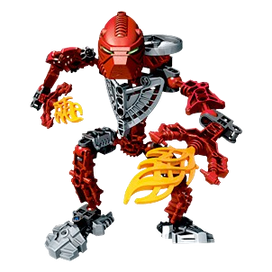 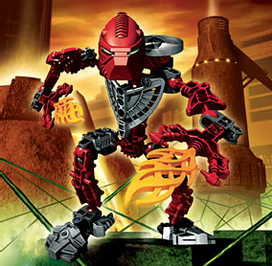 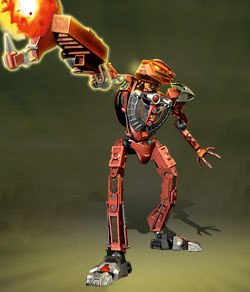 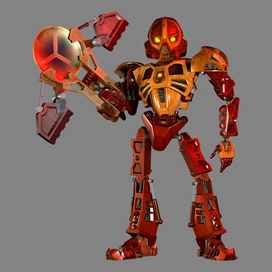 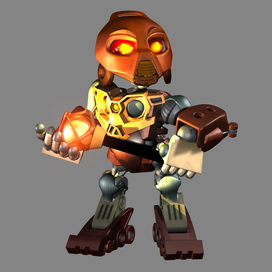 Turaga Vakama protected the legends of Tahu and led the village of Ta-Koro.1

Turaga Vakama's color was red, his village was Ta-Koro, and his mask was the Kanohi Huna, the Noble Mask of Concealment. His tool was a fire staff. He was known for his great courage and hot temper.2

Tahu Nuva noted that it was not like Vakama to be hesitant – he was usually quick-thinking and decisive like himself.3

Toa Vakama was the guardian of Ta-Metru, relying on his Kanoka disk launcher to protect the home of the mask makers.4

Vakama was the Toa Metru of Fire. His strange visions led the heroes on a dangerous search for the Great Kanoka Disks. Although looked to for leadership by some of the other Toa, Vakama was not yet sure if he was ready to be a hero. He wore the Kanohi Huna, the Great Mask of Concealment.5

As a Matoran, Vakama was Ta-Metru's most skilled mask maker.6

Vakama chose a powerful Kanoka disk launcher as his tool. It was a larger version of what he had used in the past to play the sport of kolhii [sic]. The familiarity of it made him feel more comfortable in his new body.6

As a Toa, Vakama was not used to being seen as a hero and was not sure if he would ever feel comfortable about being one.6

Vakama made fewer flawed masks that needed to be sent to the Protodermis Reclamation Center than Nuhrii.6

Vakama learned a lot from Nuhrii.6

Before BIONICLE Adventures #1: Mystery of Metru Nui, Vakama had never used a teleport Kanoka before or even forged a mask from one.6

In all the time Vakama worked as a mask maker, he never once raised his voice. It was Nuhrii who first hired Vakama as a mask-making apprentice and taught him the basic skills.6

Of all the Toa Metru, Vakama was the least comfortable with his new powers and the responsibilities that came with them. Still, when duty demanded it, he rose to the occasion and led the Toa to victory against the Morbuzakh.8

Despite arguing with her a little, Vakama felt Nokama was truly his friend. She even seemed to think he should be the leader of the Toa Metru. Vakama admitted that he had done a decent job of leading during the confrontation with the Morbuzakh, but he was not at all sure he would want the role permanently. He was, at heart, still a mask-maker. His whole life had been spent working alone at his forge, crafting protodermis into Matoran masks and Masks of Power. It required, patience, skill, and dedication, but it did not seem like the ideal job to prepare someone to lead Toa. Vakama thought the transformation had all happened too fast. He went from being an average Matoran to suddenly having new powers and responsibilities, which changed others' expectations of him.8

Vakama felt a lot of self-doubt when he made mistakes as a rookie Toa.8

As a Toa, Vakama carried a number of Kanoka disks with him, such as in BIONICLE Adventures #3: The Darkness Below.8

Before becoming a Toa Metru, Vakama was a skilled mask maker in Ta-Metru. He even did special jobs for Turaga Dume. His last request from the Turaga was to create a Mask of Time.10

Toa Vakama's element was fire, and his tool was a Kanoka disk launcher. He wore the Kanohi Huna, the Great Mask of Concealment.11

Vakama was a skilled Matoran mask maker before a crisis led to his transformation into a Toa. As of mid-story year 2004, despite the change, he remained unsure if he was cut out to be a hero. He had the potential to be a great leader, but only time would tell if he would take on the role. One of the things that made Vakama question his destiny was his strange ability to see into the future. He saw frightening visions that told him of dangers ahead. Some of the other Toa, particularly Onewa, dismissed Vakama as being "cross wired" in the head, having spent too much time around open flames. Vakama had shown great bravery and the ability to come up with daring plans. He blamed himself for the disappearance of Toa Lhikan and was determined to find his hero and free him.11

Nuhrii had been a mask maker for some time before Vakama was ever promoted to the position. It did not take long for Vakama's skills to surpass Nuhrii's, and soon Vakama was getting all the special requests for masks from Turaga Dume. Nuhrii resented this and decided that he could outshine Vakama if he got the Ta-Metru Great Disk and made it into a Kanohi Mask of Power.12

As a Toa, Vakama carried a pack of Kanoka disks with him. He used this backpack to carry the Great Disks.13

As a Toa, Vakama's mask-making tool was able to create a bit of heat and flame.13

Vakama was the Toa Metru of Fire and later the Turaga of Ta-Koro.14

Vakama began his life as a Ta-Matoran working in a foundry. Shortly after being promoted to mask maker, he was asked by Turaga Dume (Makuta in disguise) to make the Kanohi Vahi, the Mask of Time.14

As a Toa Metru, Vakama wore a Great Kanohi Huna. As a Turaga, he wore the noble version of the Huna.15, 14

As a Toa Metru, Vakama carried a Kanoka disk launcher that could also be used as a rocket pack for flight.14

As a Toa Hordika, Vakama launched fire Rhotuka spinners, something no one else could do, due to his identification with his element.16

As a Turaga, Vakama carried a fire staff.14

Vakama was the master of fire. Among the powers he demonstrated on Metru Nui were the ability to create and absorb heat and flame, to survive for a brief period in molten protodermis, and to turn stone red-hot with just a touch of his hand. He was also capable of creating a nova blast, a massive explosion of flame, but wisely refrained from ever doing so. He had a natural resistance to extreme heat. He was skilled with a Kanoka launcher.14

Vakama was always a reluctant hero. Most of the time, he felt that he did not deserve to be a Toa or that he was not equal to what was being asked of him. At first, he reacted by hanging back and letting others take the lead. Later, he tried so hard to be a leader that he irritated his fellow Toa. He was the one most affected emotionally by the transformation into a Toa Hordika because he blamed himself for leading the Toa into a trap.14

As a Turaga, Vakama was wise and patient, but also highly secretive. After realizing that the Matoran had lost their memories of Metru Nui, he was the one who suggested that the Turaga never tell them about the city until some chance existed that they could return. It was also his idea to create the fiction of Lhii to preserve the memory of Toa Lhikan. His experiences with the false Turaga Dume made it difficult for him to trust powerful beings fully, including Toa Tahu, so a great deal of time passed before he told the Toa Nuva the truth about the past.14

Turaga Vakama's tool and badge of office was the firestaff. It was actually the mask-making tool he used on Metru Nui as a Matoran. Vakama used the same tool to create the Kanohi Vahi.17

Vakama was a mask maker in Metru Nui. As a Toa Metru, he wore the Kanohi Huna, the Great Mask of Concealment, and carried a Kanoka disk launcher. He later became the Turaga of Fire in the village of Ta-Koro on Mata Nui.18

Vakama experienced visions of the future his whole life, not just when he was a Toa. He always kept them to himself for fear that others would think he was crazy.19

Toa Vakama projected fire through his hands, not his launcher.21