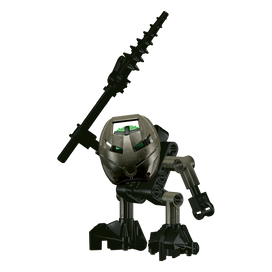 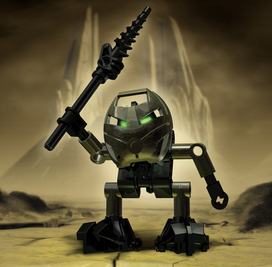 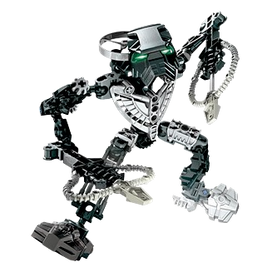 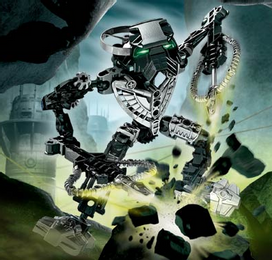 Turaga Whenua was the leader of the underground village of Onu-Koro and master of the island's complex tunnels.1

Turaga Whenua's color was black, his village was Onu-Koro, and his mask was the Kanohi Ruru, the Noble Mask of Night Vision. His tool was the Drill of Onua. He was known for his honesty; as he often said, "It serves to purpose to be false, for the earth cannot be deceived."2

Turaga Whenua was known to make his point in his own time at Turaga council meetings, which annoyed the impatient Nuju. Turaga Whenua said that when he was younger, he believed that all answers could be found in the past. He still believed that the past should be their teacher.3

Onua respected and admired Whenua and would have given his life to protect him. Turaga Whenua was afraid of heights.3

As a Matoran, Whenua was once an archivist in Onu-Metru. He worked in the Archives his whole life. To him, the Archives were more magnificent than the Knowledge Towers, the Great Temple, and the Po-Metru sculpture fields put together. He was an experienced Onu-Metru archivist before becoming a Toa. He faced down his share of snarling Rahi. Although he had never been in the lowest levels of the Archive as a Matoran, he had seen a number of exhibits sent down there and even marked a few for storage himself.5

Toa Whenua was the Toa Metru of Earth. He believed that the answers to all of Metru Nui's problems lay somewhere in its past. He was not as bold as some of the other Toa, but his caution had saved them all more than once. He wore the Kanohi Ruru, the Great Mask of Night Vision.6

On Metru Nui, Whenua did not know Nuparu well.7

As a Toa Metru, Whenua's element was earth, and his mask was the Kanohi Ruru, the Great Mask of Night Vision. His tools were twin earthshock drills.8

As of mid-story year 2004, Whenua was not as bold and confident as some of the other Toa Metru. Being a former archivist, he knew all the stories about disasters that befell Matoran who rushed into things without thinking. He believed caution, planning, and a knowledge of the past were the most important tools for a hero – unless the exhibits in the Archives were threatened, in which case he took risks of every kind to protect what he viewed as the most important place in all of Metru Nui.8

Whenua had lived in dim light, sometimes almost complete darkness, for much of his life. Like any Onu-Matoran, over time his eyes had adjusted to the point where he could see in the semi-dark. The brightness of the twin suns hurt his sensitive eyes.9

Whenua was the Toa Metru of Earth and Turaga of Onu-Koro.10

Whenua was the master of earth. He could cause earthquakes, raise earthen walls, and even make hands of earth reach out and grab an enemy. His time as an archivist left him with an encyclopedic knowledge of Rahi and Metru Nui history. He had strong night vision, but his eyes were weaker in daylight.10

Whenua was not the boldest of Toa, preferring to hang back and analyze a situation before plunging in. The only exception to this was when the Archives were threatened, at which point Whenua behaved like a mother ash bear defending her territory. He quarreled often with Nuju and Onewa, although he and Onewa later became good friends. Whenua firmly believed that history repeated itself and that knowledge of the past was essential to success. As a Turaga, Whenua had a reputation for fairness and honesty. Although he had a more balanced view of life, he still believed that the answer to many problems lay in memories of what had gone before.10

As a Matoran, Whenua worked in the Great Archives.12

The drill staff, also called the drill of Onua, was Turaga Whenua's tool and badge of office. It was an altered version of the earthshock drills Whenua carried as a Toa Metru; it transformed when he became a Turaga.13

As a Toa Metru, Whenua was not reckless like Matau or a leader like Vakama. He preferred to analyze situations before rushing into them. However, no one could question his bravery as he aided in the fights against the Vahki and the Visorak. Even as a Toa, Whenua felt a special connection to the Archives; it was at his urging that the Toa Metru explored them to investigate a possible water leak. Whenua was heartbroken when the earthquake ripped open the Archives, releasing all the beasts kept there on his city. As a Toa, he wore the Kanohi Ruru, the Great Mask of Night Vision, and carried twin earthshock drills. Whenua later became the Turaga of Onu-Koro, known for his wisdom and fairness. He had a love of history, believing that the solution to many of the day's problems could be found in the past.14

Whenua was much more comfortable in his own metru than he was in others. He had a vast knowledge of Metru Nui's past, which he drew on to solve problems, but he was probably also the most cautious of all the Toa. He really did not feel cut out to be an adventurer.15