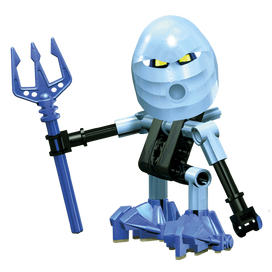 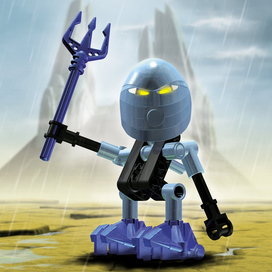 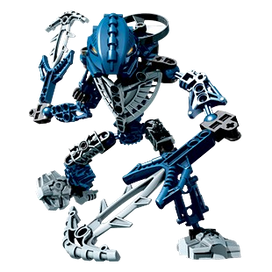 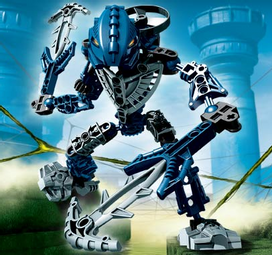 Turaga Nokama was the only female member of the Turaga Council and led the floating village of Ga-Koro.1

Turaga Nokama's color was blue, her village was Ga-Koro, and her mask was the Kanohi Rau, the Noble Mask of Translation. Her tool was a trident. She was the only female Turaga. She was famous for her ability to resolve disputes among the other Turaga.2

Turaga Vakama often considered Turaga Nokama to be the wisest of all in the Turaga council.3

Toa Nokama served Ga-Metru, where protodermis was researched and purified. Her hydro blades let her swim at high speed through the protodermis canals of the metru.4

Toa Nokama was the Toa Metru of Water. Nokama was intelligent but still had much to learn about listening to the advice of the other Toa. She could have been a strong leader of the Toa Metru, but she believed it was Vakama's destiny to assume the role. She wore the Kanohi Rau, the Great Mask of Translation.5

Nokama had never nursed any dreams of becoming a Toa. She enjoyed her life as a teacher in Ga-Metru, gaining new wisdom each day and passing it on to others. Her happiest moments had been spent in a classroom or showing her students the ancient carvings at the protodermis fountains. When she became a Toa, she realized that being a hero could be a lonely role.6

Nokama first met her friend Vhisola when Vhisola was a student in one of Nokama's classes. Vhisola was always eager to learn, almost too eager. In her enthusiasm, she always seemed to make some mistake or other. Then she would get flustered and make another and another, until her project was a mess. Eventually, Nokama realized that if she spent extra time with Vhisola, she did better work. They became friends, even if sometimes it was a stormy friendship. The more time they spent together, the more time Vhisola wanted to spend. If Nokama said she was too busy to practice kolhii [sic] or explore the canals, Vhisola would sulk. Although they had known each other for a long time, Nokama had never been inside Vhisola's home until becoming a Toa Metru. This stemmed from the embarrassing fact that the walls of Vhisola's home were covered with carvings of Nokama, records of her achievements, and copies of awards she had won.6

The sight of Vahki had always filled Nokama with a sense of dread.6

One of the awards Nokama won as a teacher read:

Nokama wondered repeatedly if becoming a Toa Metru had been a good thing. She felt that she did not seem to get along well with any of he comrades, and they were certainly not the five she would have chosen. Only Vakama struck her as possessing real wisdom behind his shy front, and she wished that he would recognize his potential to be a leader.8

As a teacher in Ga-Metru, Nokama made a point of telling her students to always make sure of their facts before they spread a tale.8

Nokama once remarked that she would have been teaching "elementary translation" if she had not become a Toa. Nokama was grateful for her new powers, but she also missed some things about her life as a Matoran and was concerned that Toa did not have time for fun.8

Nokama was a well-respected teacher in Ga-Metru before she became a Toa. She was smart and resourceful but sometimes talked when she should have listened. She considered Vakama to be her best friend among the Toa Metru, although she enjoyed joking around with Matau. She took being a Toa very seriously, but sometimes she missed her old life and her Matoran friends. She was sure that she could be a good Toa, but she was not certain she would ever get used to the demands of being a hero.9 As of mid-story year 2004, she had shown no interest in the impulsive Matau, although he particularly wanted to impress her.10

Toa Nokama's element was water, and her tools were twin hydroblades. She wore the Kanohi Rau, the Great Mask of Translation.9

As a teacher, Nokama knew it was important to get her class out of the classroom now and then, and let them see some of Metru Nui's history for themselves. For example, she took them to see ancient carvings at the Great Temple just before Lhikan handed her a Toa stone.11

Toa Nokama was an experienced diver.11

Nokama was the Toa Metru of Water and Turaga of Ga-Koro.12

As a Matoran, she was a teacher in a Ga-Metru school. Vhisola was one of her students.13

Nokama controlled the power of water. She could hurl jets of water, summon anything from a trickle of moisture to a tidal wave, calm raging waters, and survive for prolonged periods of time at great depths. She had a knack for strategy, making her a formidable opponent.12

Although water was associated with peace and tranquility, Nokama was capable of flashes of temper and being haughty about her own wisdom at times. Of all the Toa, Nokama had the most difficult time adjusting to the fact that her Matoran friends did not know how to treat her after she transformed. After taking time to get comfortable with her new self, she was able to forge friendships with the other Toa Metru that continued when they became Turaga. She was a strong supporter of Vakama, even after his recklessness led to their mutation into the Toa Hordika.12

As a Turaga, Nokama was known for her logical approach. She had seen how often decisions based solely on emotion led to trouble. The Ga-Matoran respected her for the fact that she would always listen to every side carefully before making a decision. She was strongly in favor of telling the Toa Nuva the truth about Metru Nui.12

As a Toa Metru, Nokama carried twin hydroblades which could pull her through water at high speed.12 She wore a Great Kanohi Rau.12, 14 As a Toa Hordika, she carried twin fin barbs, which could dig through most substances and aid in climbing, as well as charge up her Rhotuka spinner. As a Turaga, she carried a trident carved from the bones of a Makuta fish and wore a Noble Kanohi Rau.12, 14

The Trident of Nokama was Turaga Nokama's tool and badge of office. It was crafted to resemble the tridents that Ga-Matoran used to catch fish in Ga-Metru. Nokama carved it while still a Toa from the bones of a Makuta fish.15

Turaga Nokama once taught Hahli a song, one written long ago that spoke of hope for tomorrow.16

Wise and patient, Nokama had a career as a teacher in Metru Nui before becoming the Toa Metru of Water. As a Toa Metru, she wore the Kanohi Rau, the Great Mask of Translation, and carried twin hydroblades. From the start, she stood by Vakama even when the others doubted him. It was she who decided Vakama should be the team leader and talked the others into it. It was also Nokama who realized that the Toa Metru needed to work together to defeat the Morbuzakh. As her confidence and experience grew, Nokama became one of the most effective Toa. In her time as a Toa Hordika, Nokama discovered a bond with nature she had not known before. After Vakama's betrayal of the group, Nokama took over as team leader and led the successful search for Keetongu and attack on the Visorak. As a Turaga, Nokama led the village of Ga-Koro on the island of Mata Nui. She gained a reputation for deciding issues based on logic, rather than emotion, and listening to every side carefully before making a decision.17